5 talking points ahead of Manchester Uniteds clash with Zorya Luhansk 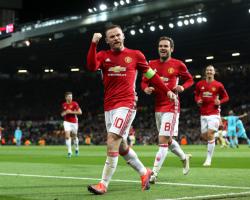 Here we take a look at five talking points ahead of the match in Ukraine.

UNITED ONLY NEED DRAW BUT VICTORY IS IMPORTANT

Jose Mourinho's men could also progress with a defeat if Feyenoord fail to win their match, although the strong 19-man squad selected suggests the Portuguese is not taking any chances

Victory is also important in the wake of a third-straight Premier League draw and seven-match winless run away in Europe, stretching back to last year's Champions League play-offs against Club Brugge.

Suspended for Sunday's 1-1 draw at former club Everton, the United skipper is back in the squad for the Group A finale and could make history in Odessa

Rooney is just one goal shy of Sir Bobby Charlton's record haul of 249 for the club, with the match against the little-known Ukrainians looking like a fine chance to equal Charlton's record and even overtake him

BAILLY BACK IN CONTENTION

Of United's four high-profile summer acquisitions, Eric Bailly has arguably been the most impressive

It was a big blow when the Ivorian suffered knee ligament damage in the 4-0 humiliation at Chelsea on October 23, which the defender expected to keep him sidelined for two months

Bailly, though, was fit enough to take his place on the bench at Everton and, having travelled to Ukraine, Mourinho could see fit to bring him back into the fold against Zorya

FOSU-MENSAH IN WITH A SHOT

The Dutchman last started a first-team match when the Ukrainians visited Old Trafford on September 29, but the absence of Antonio Valencia and Matteo Darmian surely boosts his chances of a start against Zorya

The previous Group A matches against Fenerbahce and Feyenoord have been marred by violence in the Black Sea city, reportedly started by fans of local club Chornomorets Odessa

Bats, sticks and axes are said to have been used but UEFA moved to downplay security fears, despite United warning its 900-or-so in attendance about the threat of attacks.