​So we're in lockdown, then. That means you have to stay in your house.

It means you may not be able to grab a few tinnies with your mates or spend the entire day aimlessly walking to make the most of the sun, but trust me, you don't have to go stir crazy.

Football Manager 2020 remains completely free to play on Steam for one final week, sending you into extra time until 3PM (GMT) on April 1st across PC/Mac.

That's because you can play Football Manager. It's ​Krishan Davis We've all heard of the Class of 92, but why not get stuck in early on and concentrate on bringing through a new class of youth team players you can win the whole lot with.

Get that development system up to scratch, bring in a group of them at once and see where it takes you. You've also got that one academy player in every matchday squad record to maintain, so better not let everybody down.

You've already got two incredible young players to work with in Mason Greenwood and Hannibal Mejbri (they become amazing, honestly) so make it your goal to continue the production line. Or, you could do that thing where you keep ​Paul Pogba and get him to shut up his doubters.

Because his stats are really, really good on FM20. And because he's a really good footballer.

Make him the focal point of the new-look United, team him in the same midfield as Bruno Fernandes and watch them run riot. It'll be fun, but you need to convince him to sign a new contract first. And you've got the chance to do it on Football Manager... 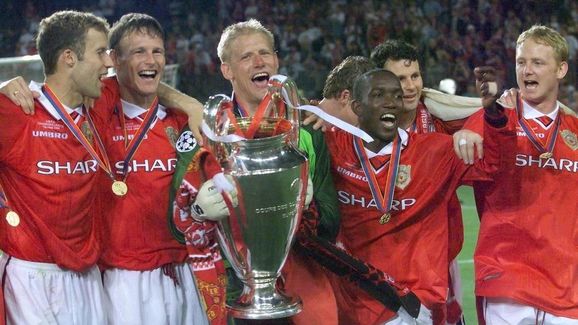 Winning the real treble - Premier League, FA Cup, Champions League - has only ever been done by ​Manchester United. And given the current season might never end and Liverpool are already knocked out of all other competitions, there's no danger of that changing any time soon.

So no time like the present, then, to get back on the road to trying to win all of the trophies.

It takes some real time. United don't start the game in the Champions League, so it's a case of getting back there first, and you've got a host of big teams with big players to overcome both domestically and abroad if you want to lift old big ears.

You'll need to build the squad to do it and it'll take some effort and patience, but what better way to spend the time, eh?

Eric Bailly makes me smile. And United fans love him. So take him along for the ride and have him lift trophy after trophy, just because that would make the fanbase happy.

Ryan Giggs won 34 trophies in his United career, and Bailly sits on a solid three (including the Community Shield, that is) at the age of 25.

Is it possible? Yes. Probably. Might be. Try it and find out! Do it the right way.

Start terribly. Get down to 15th in the league after a few seasons of underperformance. Get smashed 5-1 by Manchester City and notice in the match engine that someone's pulled out a banner that reads "3 years of excuses and it's still crap, ta ra [manager nickname]".

Get your job status to precarious, and then find your modern-day Mark Robins. Get Tahith Chong to score that match-winning goal in an FA Cup replay that saves your job, and then go on to win 39+ pieces of silverware after a total 26 years of virtual Manchester United management.

Think about it, you'll have all the time to do most of the jobs above in that time, too.