8 of the Most Memorable Champions League Last 16 Ties

The Champions League has been Europe's top club competition since its inception in 1955 when it was called the European Cup, and later re-branded in 1992/93.

As 2019's edition enters the home stretch, we took a look at eight of the most exciting last 16 ties in Champions League history. The first leg of this Champions League tie was hosted by Arsenalat the Emirates stadium. After a 26th minute goal from David Villa, the Gunners were able to rally with two late goals from Robin van Persie and Andrey Arshavin. The match ended 2-1 to Arsenal with an exciting second leg still to be played at the Camp Nou.

This unlikely result set up an extremely intriguing second leg to be played in Barcelona. Early on Lionel Messitook over the match. The Argentine forward started off the scoring in first-half stoppage time and after a Sergio Busquets own goal and Xavi's smart finish from a David Villa through ball, it was up to Messi to claim the tie for Barca. Messi slotted home a penalty shortly after the Xavi goal and sealed Barcelona's entrance into the quarter-final. The first match between the sides ended up being the highest-scoring first leg in the history of the competition, with Manchester Citycoming out on top 5-3. Goals from Sterling, Aguero, Stones, and Sane overpowered the young Monaco squad despite them scoring a respectable three goals themselves.

With Manchester City holding a commanding two-goal lead, it was hard to see Monaco moving on to the next round. Kylian Mbappe Fabinho scored in the first half to put Monaco in the driver's seat but were ultimately cancelled out by Sane in the 71st minute. Just six minutes later, Tiemoue Bakayoko grabbed the lead for Monaco and ended up sending them through on away goals. A humiliating first-leg loss in Munich was just the beginning of a particularly painful Champions League tie. The match ended 5-1, with the Gunners really only in the game for the first half an hour after Alexis Sanchezequalised in the 30th minute.

The second leg was not any better for Arsenal, who were forced to relive the same scoreline in front of their own fans. Napoli came into this matchup with Chelseaas a definite favourite, with the Blues struggling for form in the Premier League. After a 27th minute strike from Juan Mata, Napoli scored three goals in response to claim a commanding 3-1 lead heading into the second leg.

Chelsea managed to send the game to extra time through a late Frank Lampard penalty and in the end, Branislav Ivanovic put away a low cross from Drogba securing the win for Chelsea 5-4 on aggregate. The match between Arsenal and Roma was not the most attractive tie of the 2008/09 season, but it ended in an incredibly tense penalty shoot-out. The first leg was played at the Emirates Stadium and was defined by a Robin van Persie penalty in the 37th minute.

In the reverse leg of the fixture, it was Roma who got the upper hand and lead through Juan's tap-in at the back post. Extra time remained scoreless and the match went to penalties. After 13 spot kicks, the Gunners walked away victorious into the quarter-finals of the competition. The first leg was dominated by Bayern for the majority of the first hour, but Juventuswere able to pull themselves up and make it a contest. The Old Lady stormed back at the end of the game scoring two goals and setting up the second leg for an exciting match.

Juve came out firing on all cylinders in the second leg, scoring twice in the first 30 minutes. They ended up working themselves into the ground, and could not sustain that level of play for the entire match. Bayern ended up scoring in the 91st minute to send the tie to extra time, where they would go onto score another two goals and eventually move on to the quarter-final. Barcelona hosted the first leg and were on the front foot for most of the game. With the exception of an own goal in the 33rd minute, it was a very convincing performance by the Blaugrana, culminating in a 3-1 aggregate lead.

The second leg of this tie will always be defined by Ronaldinho's out swinging strike from the top of the box, despite it counting for very little in the end. Chelsea came out and scored three goals in 20 minutes, leaving Barcelona on their heals. Ronaldinho produced a world-class performance pulling two goals back for Barça, but in the end, it was a towering header by John Terry which sent the Blues to the next round. 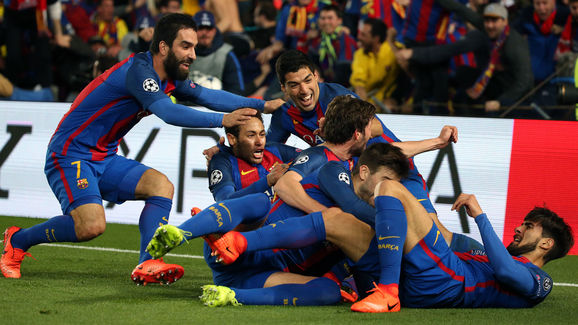 The most memorable last 16 Champions League tie really only has one possibility. Barcelona coming back from a four-goal deficit in the second leg is one of the most improbable outcomes to a match many people have ever seen.

The first leg was completely dominated by PSG who humiliated Barcelona in every aspect of the match. Angel Di Maria scored a brace for the Parisians, in addition to goals coming from Julian Draxler and Edinson Cavani. The 4-0 win at home for PSG essentially put the tie to bed, but Barca had other plans.

In the second leg of the fixture Barcelona came out strong scoring three in 50 minutes, but a 62nd-minute goal from Cavani seemed to put the tie away on away goals. Barcelona decided to write their own script by scoring three goals in the final two minutes plus added time to somehow steal the victory from PSG.