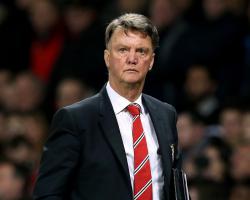 United endured a dismal end to 2015, slipping out of the Barclays Premier League top four and exiting the Champions League after embarking on their worst run in 26 years.

Although they did start 2016 with a win over Swansea, United ended the previous year with a damaging run of eight matches without a win.

Some fans have become concerned at the slow, possession-based style United play under manager Louis van Gaal and it seems they are not the only ones who are worried.

Adidas is reaping the rewards from United's global reach financially, but in terms of what is happening on the pitch, the sportswear giant is not completely satisfied, it seems.

"We sell more jerseys than expected, the foreign share is 60 percent.

"We are satisfied, even if the actual way of playing of Man Utd is not exactly that what we want to see."

Hainer is not the first person to criticise Van Gaal's playing style this season.

United fans have regularly chanted "attack, attack, attack" at the team while they slowly build from the back.

And former United midfielder Paul Scholes described the football on display at Old Trafford as "boring" earlier this season.

The statistics back up Scholes' jibe

Just 15 goals have been scored at Old Trafford this season, the lowest of the 92 league clubs.

The mood within the club seems to be one of positivity after they returned to winning ways on Saturday, however.

Juan Mata has been encouraged by the performances in the victory over Swansea and the goalless draw against Chelsea on December 28.

The United playmaker wrote on his weekly blog: "At last I can write a post feeling that we've done our duty during the weekend.

"Luckily, I feel that we have started 2016 with energy and that our negative streak (much longer than it should be) has been left behind...

I have to say that our only thought was to work well day after day, stay focused and try to revert this situation.

"In our last game of 2015, against Chelsea, I think everybody saw what I'm talking about.

"There was dynamism, courage and energy although we couldn't win

Finally, we did it on Saturday against Swansea

You could see how tough it was, but I think we deserved the three points.

"I hope this is going to be the start of a good run of results."

Next up for United is their FA Cup third round fixture at home to Sheffield United on Saturday evening.

It is understood Van Gaal told his players they could have a few days off after their win over Swansea after their busy Christmas schedule.