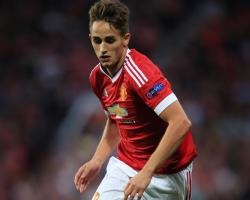 Van Gaal recalled Januzaj from his loan at Borussia Dortmund last week after the club became annoyed at the forward's lack of game time in Germany.

Januzaj, 20, started just three matches during his four-month spell at Dortmund - all of which were in the Europa League.

The United manager wants Januzaj to regain his fitness with the under-21 side before bringing him back into the first-team fold and had identified Monday's game against Reading as the ideal place for him to start.

But Van Gaal now claims he is not satisfied that Januzaj, who last played for Dortmund over a month ago, is fit enough to play in the game at Adams Park

"We have reconsidered and we think we have to build him up for the game and not risk too much by putting him in a game at once," the United manager told MUTV.