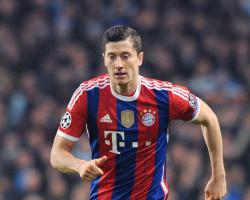 As it stands, Wayne Rooney is the only senior striker on United's books after the club sold Robin van Persie to Fenerbahce and rejected the opportunity to sign Radamel Falcao from Monaco after his woeful loan spell at Old Trafford.

Javier Hernandez is surplus to requirements and 19-year-old James Wilson is not ready to become a first-team regular despite a promising start to his career at Old Trafford.

Lewandowski has been touted as a man who could ease the striker shortage at United, but the player's agent Cezary Kucharski says his client will not come to Old Trafford on the cheap.

Speaking on Polish television, Kucharski said: "I think it would have to be a very high offer, definitely higher than 50m (ÃÂ£35million) for Bayern to consider selling).

"Robert is one of the most valued strikers on the market who guarantees goals, guarantees assists, excitement

He has shown that over many years during his career.

"Every year he is an even better player and plays at a higher level and that is very important for other clubs because he has credibility and guarantees at least 30 goals a season.

"With a player of Robert's class, the truth is that not a lot of work is required because really there are only two directions in which he could go in the future, England or Spain, and only with Bayern Munich's acceptance."

Following his controversial move from Borussia Dortmund, Lewandowski scored 17 league goals to help Bayern win the Bundesliga in his first year at the club.

The Pole scored 30 goals for club and country last season.

Kucharski does not seem optimistic about United's chances of signing his client.

"There must be a signal from the club, from Munich," Kucharski said

"There is no such signal so we are not thinking about it, because even thinking about a change of club would be unfair in my opinion to the current employers.

"There is no reason, apart from money to be honest, to even think about it.

"Bayern would have to think about why they would get rid of Robert Lewandowski? It seems to me that there is no reason to even think about it."

United manager Louis van Gaal may be short of strikers, but he has wasted no time in improving other parts of the squad.

And on Monday, the Red Devils completed the double-signing of Germany World Cup winner Bastian Schweinsteiger from Bayern and Morgan Schneiderlin from Southampton.

All four new arrivals trained with their new team-mates at the VMAC training complex, home of the NFL's Seattle Seahawks, on Tuesday.

Victor Valdes was not present as he has been left out of the 26-man squad for the four-match tour of the United States, which begins this weekend when United play Club America in Seattle.

The Spain goalkeeper has been tipped to leave Old Trafford after being left out of the touring party.

The three-time Champions League winner, who has played just once for United since signing on a free transfer last season, does not seem to be preparing for the exit though.

The former Barcelona goalkeeper tweeted a selfie with the following message on Tuesday morning: "After a Hard Training Session this morning, i am working hard for this Season! Come on You Reds !!!!"