England kicked off their own tournament with a narrow 2-1 win over Scotland and will be aware that a follow up victory against Argentina, a country the Lionesses hammered 6-1 the last time they met on this stage way back in 2007, will secure progress to the knockout rounds.

After a good win for the @Lionesses against Scotland, @benhainess sat down with @AlexGreenwood to talk:

"We got the win, that's the most important thing - three points on the board, first game," Greenwood told 90min's ​Ben Haines, initially reflecting on the Scotland clash.

"That was a really important win for, I know we weren't 100% with the performance, but for game one, to get three points, was ultimately what he needed to do. I know as we progress through the tournament, our results and performances will come together."

When Nikita Parris scored from the spot against Scotland to break the deadlock she raced over to the sidelines and the whole squad celebrated their opening goal of the tournament.

For Greenwood, who captains Manchester United at club level, it was a moment that was indicative of the close bond and togetherness that exists within this group of players. 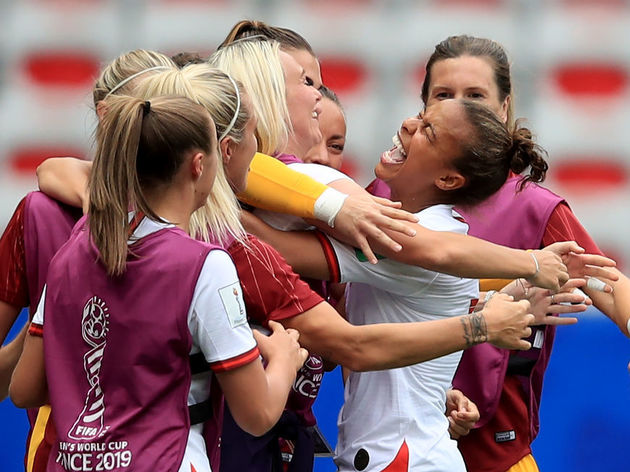 "The first goal of the World Cup was always going to be a special moment. It was so nice to celebrate as a group and just proves how close we are. That picture sums up what this group is about," the 25-year-old defender explained.

"What you see is what you get, it's so relaxed," she added.

"When we mean business, we mean business. We work hard away from the cameras, we work hard, but we need to enjoy it as well and Phil [Neville] makes sure we always have smiles on our faces We're just one big family and at the moment it's brilliant." As for challenge posed by Argentina in Le Havre on Friday night: "You never underestimate any team at a World Cup, it'd be so stupid to do that. I watched a bit of [Argentina vs Japan].

"Japan are an unbelievable team and Argentina defended so well, I think they deserved their point, but we will prepare properly for Argentina on Friday and be prepared to win."

​For 90min's preview on England vs Argentina, inc. how to watch and team news, click here.