Ander Herrera- We are going to fight for Premier League title 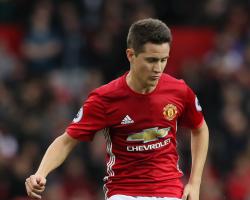 The Red Devils were outclassed at times by Real Madrid in sweltering Skopje on Tuesday night, with the manner of the 2-1 loss giving Jose Mourinho food for thought entering his second season at the helm

It was, though, another disappointing Premier League campaign for United.

Herrera has not finished higher than fourth in his time at Old Trafford and, with the title in his sights, is desperate to hit the ground running against West Ham on Sunday.

"We have to accept Real deserve to be the winners," the Spaniard said

"But we can take a lot of good things from this game.

"The Premier League starts on Sunday, there is no time to be upset, we want to be contenders for the title and we want to fight for every title this season.

"Last season, we won three trophies which is very good, but we didn't fight for the Premier League.

We are going to play in four competitions and we want to fight for all of them.

"In every position, we have two very good players, so I am optimistic for this season and let's forget about tonight.

"I know it's difficult because it's a European trophy and that's important for the club.

"But now the Premier League, then the Champions League will come, the FA Cup and the League Cup

We don't want to give away any competition.

Herrera says United simply came up short against the "best team in the world" in Real Madrid - a philosophical stance that echoed his manager's post-match thoughts.

Now, though, the attention is on the weekend visit of West Ham - a side bolstered by summer signings such as Marko Arnautovic, Joe Hart, Javier Hernandez and Pablo Zabaleta.

"We are ready and West Ham will be ready as well, because they have also played a pre-season and surely they are going to be fit as well," Herrera told MUTV.

"But we are playing at Old Trafford in front of our fans and we want to win the first game of the season.

"We have to respect them because they have a very good team, they have signed very good players.

"This season, I think the transfer window has gone good for them

They are going to be difficult to beat

Now is our chance to fight for the Premier League and we have to do it as well."