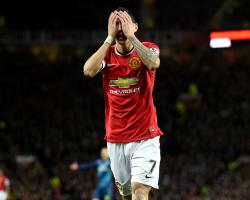 For a number of months, rumours have been circulating that PSG are keen to sign Angel Di Maria, just one year after Manchester United paid a Premier League record ÃÂ£59.7million for the Argentine winger.

Despite having already signed one wide player in Memphis Depay and allegedly interested in BarcelonaÃâs Pedro, LVG still believes Di Maria is a key part to his plans at United

Di Maria will have to submit a formal transfer request to leave Old Trafford since Manchester United have made it clear they are not in the habit of selling world-class player after only one season.

Furthermore, Di MariaÃâs home was broken into with his family still inside.

Di Maria sparkled in the early stages last season, which was epitomised by his magical goal against Leicester City

Yet in the following months, the former Real Madrid player experienced a drop in form and was dropped to the bench for large periods of the Premier League campaign.

Last season United were an unbalanced side, having to play a makeshift formation to pick up results with the team that they had

With the addition of Memphis Depay, Matteo Darmian, Bastian Schweinsteiger and Morgan Schneiderlin, United look like a more complete squad, which could result in the return of Angel Di Maria to the starting eleven.

Manchester United is on the lookout for a world-class striker and centre back in this transfer window, and PSG are keen to capitalise on this

If Di Maria is to exit Manchester, the man himself will have force the issue, he is set to rejoin the United squad July 25th