Manchester United forward Anthony Martial netted his team’s crucial second goal during Sunday afternoon’s crushing 4-0 Premier League win over Chelsea on 2019/20 opening weekend. It was the Frenchman’s 49th goal for the club – and nobody has scored more since his debut in 2015.

Then the world’s most expensive teenager, Martial famously joined United in a £36m deal, potentially rising to £58m, from Monaco on summer transfer deadline day four years ago, marking his very first appearance with a solo goal against fierce rivals Liverpool. Almost half a century of goals later following Sunday’s predatorial tap in and Martial is United’s leading goalscorer in the four years since he arrived at the club.

It is certainly a nice stat for Martial himself to own, but it is perhaps ultimately rather damning for the club as a whole that it’s top scorer in all competitions over a four-year period has averaged barely more 12 goals per season – short-termism is as much to blame as anything.

As United’s premier forward in 2015/16, a teenage Martial finished his first season at Old Trafford with 17 goals in all competitions, including a late winner in the FA Cup semi-final. He managed just eight the next season as Jose Mourinho replaced Louis van Gaal and brought in veteran Zlatan Ibrahimovic, while he improved to 11 goals in 2017/18 and 12 in 2018/19. 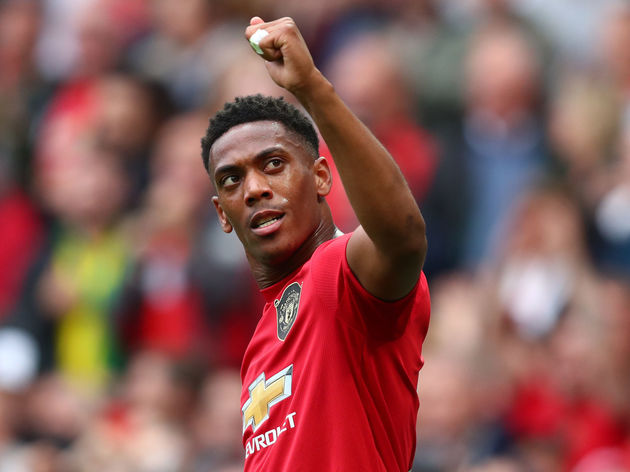 Last season, Martial (10) was one of four United players to reach double figures in front of goal in a single Premier League season – alongside Paul Pogba (13), Romelu Lukaku (12) and Marcus Rashford (10) – for the first time since the 1995/96 campaign.

Rashford is only marginally behind Martial on 47 since 2015 after scoring twice against Chelsea.

United’s next best goalscorer since 2015 is Lukaku, now of course with Inter after securing a £73m transfer to Italy last week after falling out of favour at Old Trafford. The Belgian, who arrived for £75m in 2017, scored 42 goals in his 96 United appearances.

Paul Pogba, meanwhile, has scored 31 goals from midfield since joining in 2016. Ibrahimovic scored 29 times during his brief stay in Manchester, while Jesse Lingard and Juan Mata have also both netted on 29 occasions in all competitions in the last four seasons.

Anyone else arriving to work with a spring in their step this morning? ‍♂️‍♀️#MondayMotivation #MUFC pic.twitter.com/vTXcu8uJiQ

As a marker of the level that United’s top forwards should strive to be at, Manchester City striker Sergio Aguero has scored 125 goals in 175 appearances since the start of 2015/16.

So often criticised for a moody and sullen demeanour, Martial had a huge smile on his face when he scored against Chelsea and made a point of pointing to the back of his shirt in celebration, having recently reclaimed his favoured number nine shirt. It is potentially a big moment.

After being shunted to 11 when Ibrahimovic arrived in 2016 and seeing Lukaku then take the number nine shirt in 2017, Martial has finally got his old jersey back and is no longer stuck in the shadows behind a higher profile signings. With confidence restored and playing in a fluid new system that suits his strengths, 2019/20 could well be his best season for United yet.

He was annoyed when he had to switch to 11 to make way for Ibrahimovic three years ago, so hopefully he’ll be happy back in his old shirt. This is a big year for him #MUFC https://t.co/Z1QnM3Hh5M