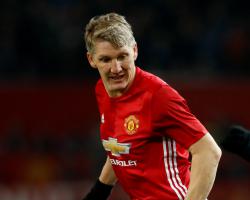 Wednesday's comfortable EFL Cup win against West Ham saw the 32-year-old make his first United appearance in eight months, continuing a comeback few could have foreseen after being frozen out by the Portuguese.

Schweinsteiger's stock plummeted so far that the club had to write him off as an asset in their accounts, so eyebrows were raised when the former Germany captain returned to first-team training at the end of October.

The comeback continued against the Hammers when he was brought off the bench towards the end of the 4-1 win - his first United appearance in 255 days.

"Everybody was happy," Mourinho said

"I was happy, everybody was happy because when he was not training with the team, he did it in a professional way.

"When he started training with the team he was struggling a little bit because it is not easy, but he fought a lot against that and he managed to do that without injuries and the need to stop.

He is another one that can help us.

"During the season, you have injuries, you have suspension - for example in that match, (Paul) Pogba and (Marouane) Fellaini were both suspended, so two less midfield players (were) available for the match and he was ready.

So his future is about this.

"He is another one in the squad that is working to try to have more chances."

It was expected that Schweinsteiger's return to training was mainly to aid a January exit.

The midfielder held talks with Chicago Fire a fortnight ago about a move to Major League Soccer, but Mourinho says he could yet remain at Old Trafford.

"Of course he can," he said when asked if the midfielder could stay beyond January.

"When you have a contract with the club, you are the powerful one

You are the powerful one

You are the one that can decide your future.

"Okay, so in the summer we try to make something happen for Bastian to get a different future

He was the powerful one, he decided to stay even in difficult circumstances.

"He worked for that and he deserved that little happiness of the last match, so January again he will be the powerful one and probably with better feelings than before because now he is working with the team.

"I think he understands our dynamics, our philosophy.

"You can see that the happiness he showed the other day is from somebody that is so happy, maybe so proud with his efforts and determination

That is an attribute Mourinho is also pleased to have seen in Anthony Martial recently.

A fine first season at Old Trafford has been followed by a stuttering second campaign, with the United boss recently saying the forward was struggling to adapt to his style.

However, Martial showed a glimpse of his quality with a brace against West Ham on Wednesday and Mourinho has been impressed by his improved work-rate.

"He is working harder than before, to be honest.

"In this match, obviously when you score twice I think maybe it helps happiness to be back, confidence levels to be back.

"I think it can help because as an attacking player you can play very, very well, but if you don't score goals the happiness is not there, so hopefully it helps him."

Martial will be hoping to start again at Everton on Sunday - a clash captain Wayne Rooney will miss through suspension.

Pogba and Fellaini are back in contention after bans of their own, but left-back Luke Shaw is a doubt after being forced off in midweek.

"The injury is a pity," Mourinho said of the unspecified issue.

"We were on this process of developing him as a player - he has a lot to learn and great potential to develop so we were giving him 90 minutes.