The regular season came to an end over the weekend and Fire failed to make the MLS playoffs after finishing eighth in the Eastern Conference.

The Time has now come: I would like to thank both, you and my teams @FCBayern, @ManUtd, @ChicagoFire and @DFB_Team and of course @AnaIvanovic and my family for their support!

It means that Schweinsteiger will now call time on a senior playing career that began 17 years ago in 2002 when he made his first-team debut for Bayern at the age of just 18.

He went on to play 500 games for his boyhood club, establishing himself as one of the best midfielders in the world, and won eight Bundesliga titles, seven national cups and the Champions League, the latter as part of an historic treble in 2012/13.

Playing 121 times for his country between 2004 and 2016, Schweinsteiger helped Germany to World Cup glory in 2014, a first global triumph as a unified national team. 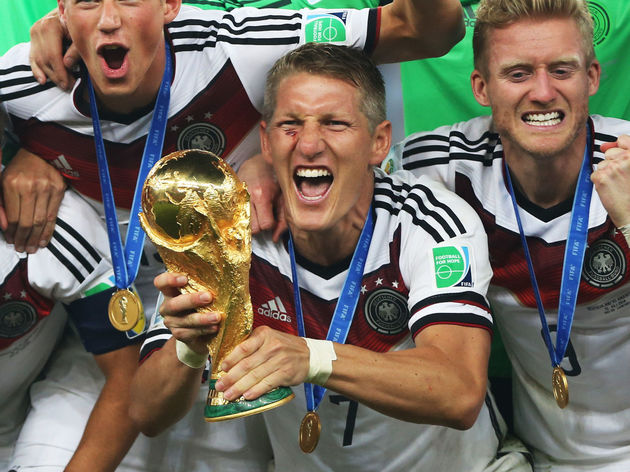 A move to Manchester United came in 2015, reuniting

Schweinsteiger made the switch to North America in time for the 2017 MLS season, going onto play just shy of 100 games for Chicago Fire. His initial unveiling in Chicago went viral when a confused journalist asked if the player thought Fire had a chance of winning the World Cup.

In a message on Twitter, Schweinsteiger thanked each of the clubs he has played for in his illustrious career, and the German national team as well as his wife, former professional tennis player Ana Ivanovic, and his family.

A statement addressing his fans read: “Saying goodbye as an active player makes me feel a little nostalgic, but I am also looking forward to the exciting challenges that await me soon.

“I will remain faithful to football. Many, many thanks for the time we spent together, I will always have a place for you in my heart!”