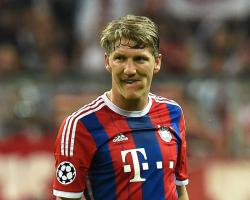 United boss Louis van Gaal is understood to be keen on signing the Germany captain this summer and Rummenigge says the rumours have pricked Schweinsteiger's ears.

"I spoke to Bastian Schweinsteiger on the phone while on holiday and we're going to meet again when he's back," Rummenigge said at a press conference on Thursday.

"I'm not going to hide the fact that I discerned from these talks that he is flattered by the interest from England."

The 30-year-old has only a year left to run on his current contract with Bayern while talks over a new deal do not appear to be on the agenda.

Schweinsteiger played under Van Gaal at Bayern, winning a Bundesliga and DFB-Pokal double, part of his collection of eight Bundesliga titles and seven domestic cup triumphs for the Bavarian club.