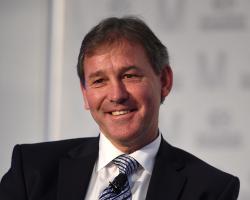 Van Gaal's position at United has come under intense scrutiny this season, especially with the club at one point going five Barclays Premier League games without a win.

Exiting the Champions League at the group stages and then the Capital One Cup has not helped matters, and the inevitable rumours of a move for Pep Guardiola, when he leaves Bayern Munich this year, have surfaced.

However, Robson, who is an ambassador for United and has recently been promoting the club's activities in India, feels Van Gaal must be given credit for the recovery he has already instilled at Old Trafford.

"Van Gaal was under pressure even when he was at Barcelona and Bayern Munich," Robson, who made 461 appearances for United and scored 99 goals, told the Times of India.

"At those clubs too, your ambitions had to be high

We have 680 million fans across the globe and that does put pressure (on) as we have to please them.

"He had to rebuild the club from what David Moyes left behind and put them back to where they were under (Alex) Ferguson.

But Louis has got huge support from people within the club."

United are currently on an upward trend in the Premier League, lying fifth in the table following a morale-boosting win over Liverpool last time out.

Title ambitions may be far fetched for Van Gaal but Robson is confident the club can at least secure another Champions League spot.

"We are just seven points behind the leaders and at this stage of the season, it's not something you cannot control," Robson said.

"We sort of dropped behind because of a long injury list

We lost bad points against Bournemouth and Norwich.

"But now with everybody coming back to fitness, the title is still there, even though I believe we aren't good enough to win it this year

We can gain a Champions League spot."