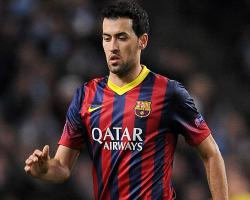 Pedro has been linked with a move to United, who are light on forwards following the departures of Robin van Persie and Radamel Falcao.

Pedro is regarded as one of Spain's best attacking forwards, but he faces the unenviable task of having to dislodge either Lionel Messi, Neymar or Luis Suarez to get into the Barcelona first-team.

Busquets wants Pedro to stay at the Nou Camp, but understands why the 27-year-old is considering his options.

"I have spoken with Pedro," the midfielder told a press conference in San Francisco ahead of Barca's friendly against United.

"I think that as a team-mate and friend, I would like him to stay for a long time, but I understand that he has doubts.

"He wants to play but there is a lot of competition

In our team we have the best players and it's very difficult (to get into the team).

"I hope he stays but the decision is his."

Pedro joined Barcelona's youth team as a 17-year-old and then went on to enjoy success with the first team, winning the Primera Division five times and the Champions League on three occasions.

The Tenerife-born player can operate across the front three, which is of interest to United manager Louis van Gaal, who wants to play 4-3-3 or 4-2-3-1 next season.