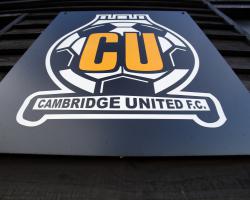 Cambridge Utd V Man Utd - view commentary, squad, and statistics of the game live.Chadwick relishing United reunionLuke Chadwick once was the envy of many when playing for Manchester United, but the 34-year-old is now living out his childhood dream playing for hometown club Cambridge.Chadwick's past and present collide on Friday night when Manchester United, with whom he won a Premier League winners' medal in 2001, visit Cambridge's R Costings Abbey Stadium in the FA Cup fourth round."It's the first time I've been involved in a game against them, really looking forward to it," Chadwick told Press Association Sport.Chadwick made 39 appearances for Manchester United, 21 as a substitute, scoring two goals, after coming through the youth team ranks to play under Sir Alex Ferguson."It was a great time," Chadwick added."I went there when I was about 15, stayed there for a good six, seven years and really, really enjoyed it."(Ferguson) was an incredible manager, an incredible man

It's great that I can say I played under probably the best manager in the history of football."Chadwick made his debut in a League Cup clash at Villa Park in October 1999 and left in 2004.Spells at West Ham, Stoke, Norwich and MK Dons followed before last March he signed for Cambridge."To come here was a dream of mine since I was a kid," Chadwick said."It was great to finally come here, pull on that amber shirt and play for the club I supported as a child

I love this club

It means everything to me."Chadwick helped Cambridge win the FA Trophy and end a nine-year absence from the Football League with promotion to League Two.Both successes were achieved at Wembley, so Chadwick knows Richard Money's side will not be fazed by the occasion."It's a great club here at Cambridge and we deserve this draw against a massive club," he said."We've got some fantastic players here at Cambridge

I'm sure they can't wait to get on the pitch."We'll have the whole world watching on Friday night and they'll be able to show them how good they are."Meanwhile, Louis van Gaal expects Cambridge to launch an aerial bombardment at his Manchester United side.The Dutchman has studied his League Two opponents in great detail and is expecting them to try to use their height to cause a huge shock."Cambridge play very direct, with long balls

They have five or six players above 1m 90cm (6ft 3in) so for us it's difficult to defend and that's why you have to prepare yourself very good," the United manager said."It's not so easy to beat Cambridge United."Van Gaal, of course, is right

The Cambridge squad contains Josh Coulsen, Tom Champion, Adam Cunnington, Tom Elliott, Liam Hughes and Issaga Diallo, who are all 6ft 3inches.But it is not just the physical battle United must win.The players will have to be mentally strong enough to deal with the pressure of knowing that if they lose the result will go down as one of the biggest cup upsets in recent memory.Van Gaal has already slipped up against lower league opposition this year

The 4-0 defeat at MK Dons in the Capital One Cup left a big imprint on his mind.And if he needed reminding about how easy an upset can happen, he received it from his homeland this week."On Wednesday PSV Eindhoven, who are top of the first league in the Netherlands has lost against the third team of the second division (Roda JC)," the 63-year-old said."Ajax, Feyenoord and PSV are out

That's remarkable."Surprises shall happen also in the FA Cup

There are always surprises and I hope we are not the surprise."It's another opponent with another playing style with other players and we have to beat them."Van Gaal experienced a similar scenario to the Cambridge match in the third round when his United team had to dig deep to see off League One bottom club Yeovil.Van Gaal has won cup competitions in Spain, Holland and Germany, but the FA Cup already has a special place in his heart even though he has only played one match in it so far."It's different here, there's more in the atmosphere," he said."The FA Cup is very important for the fans and the players."In Germany it's fantastic if you win the cup but not like here."The attendances are better here too

That is another difference."Jonny Evans and Chris Smalling have been ruled out with unspecified injuries, but Robin van Persie and Luke Shaw are available again.Van Gaal refused to confirm speculation former Barcelona goalkeeper Victor Valdes will make his debut for United