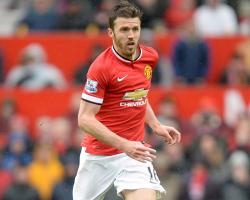 After complaining about a lack of cover in midfield last season, United manager Louis van Gaal spent more than ÃÂ£40million on Schweinsteiger, who arrived from Bayern Munich, and former Southampton man Schneiderlin this summer.

That means Carrick is no longer the automatic pick he was last season.

The player, who turned 34 on Tuesday, has no problem competing with the new arrivals though and hopes their introduction will be a positive move for the club as they look to compete on four fronts.

"You want the best players here, and it's good for the squad, for the team," Carrick said.

He has done terrific

It's another step for him in his career and there's no better place to be.

"We all know what Basti brings

He is a terrific player and he'll have a big influence on us going forward."

Despite the fanfare surrounding his signing, Schweinsteiger has failed to impress so far on United's pre-season tour of the United States.

The German World Cup winner is yet to start a game, with Van Gaal preferring to use Carrick and Schneiderlin as holding midfielders in the 4-2-3-1 formation he has used in the three games so far.

Schweinsteiger looked relatively comfortable in the first game against Club America in Seattle, but Van Gaal described the midfielder's performance against San Jose Earthquakes as "bad" and he missed the 3-1 win over Barcelona with a minor injury.

The 30-year-old is fit to feature in United's final game of the tour against Paris St Germain in Chicago in the early hours of Thursday, however.

Although he missed it through injury, Carrick is aware United won all their pre-season matches last season before accumulating just 13 points from their opening 10 Premier League matches.

"You can gauge what you can from these pre-season games, but Tottenham on the first day of the season is where you're judged the most, and we're well aware of that even after three good results," the United midfielder said.

That said, Carrick thinks United are in a much better position heading into the new season than they were 12 months ago.

"The manager has been here a longer time and we're now used to his way of playing," Carrick said.

"We've improved as a team by understanding his way

I think we're stronger in numbers, in strength and depth and in quality this year."

Goalkeeper Sergio Romero is available to face PSG but may not do so having spent just two days with his new team-mates since signing a three-year deal with United.

Angel di Maria is still absent from the tour amid claims he is close to a move to the French champions.

There will be no chance to ask Van Gaal about Di Maria's situation on the eve of the game as United have decided not to hold a pre-match press conference in Illinois.