Carrick Valencia and Darmian among those to miss Uniteds Ukraine trip 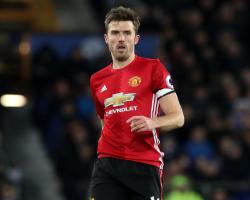 Jose Mourinho's men are looking to extend their Europa League campaign into the spring, which they will do if they draw their final Group A game in Odessa on Thursday.

If Feyenoord fail to win against Fenerbahce, then United would even progress with defeat in Ukraine, where their 19-man squad arrive on Wednesday afternoon.

Wayne Rooney, suspended domestically for Sunday's defeat at Everton, is part of the travelling squad, so too defender Eric Bailly as he steps up his return from injury.

Carrick, Valencia and Darmian all started at Goodison Park but have remained in the north west, while Depay and Schneiderlin have been overlooked by Mourinho.

The duo have barely made a first-team impact since the Portuguese's summer arrival and have been strongly linked with an exit next month.

Chris Smalling and Luke Shaw remain unavailable through injury, while Bastian Schweinsteiger was not registered for the Europa League.