Here’s a look at everything you need to know about United’s opposition, including their history, past encounters and players to watch out for… Formed in 1891, Brugge are among the oldest football clubs in Belgium and have actually existed longer than some top English sides, including both Liverpool and Chelsea.

They have won 15 Belgian league titles, most recently in 2017/18, which puts them second only to Brussels giants Anderlecht, and have frustratingly been runners-up as many as 23 times.

Brugge have played in Europe for most of the last 50 years and have represented Belgium well on the continent. In recent times, they have reached the Champions League group stage in three of the last four seasons, while in the 1970s they played in the UEFA Cup and European Cup final – they actually lost both games to Liverpool in 1976 and 1978 respectively.

Brugge have only been paired with United in European competition once before, and that was relatively recently in a two-legged Champions League playoff in August 2015.

United were managed by Louis van Gaal at the time and won the first leg 3-1 at Old Trafford, despite going a goal down when Michael Carrick deflected the ball into his own net. Memphis Depay turned the game around by scoring a brace in one of his few good performances for United, while Marouane Fellaini extended the aggregate lead with a later third. The second leg in Belgium was much more straightforward, with Wayne Rooney completing a hat-trick inside an hour and Ander Herrera also getting in on the action as United won 4-0.

How Did They Qualify?

Brugge have entered the Europa League at the last 32 stage after finishing third in their Champions League group this season. They reached the group stage after impressive qualifying wins over Dynamo Kyiv and Austria’s LASK, before being placed into an intimidating ‘group of death’ alongside Real Madrid, Paris Saint-Germain and Galatasaray.

Brugge scraped together enough points to finish above Galatasaray. But while they were ultimately win-less, they did give Real an almighty fright at the Bernabeu in October after going 2-0 up in the first half and only being pegged back late on. 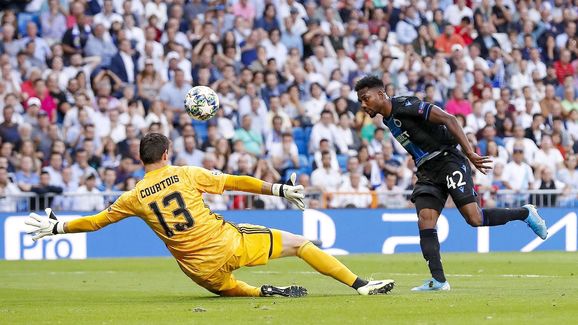 They were also comprehensively thrashed 5-0 at home by PSG and it was a late equaliser in Istanbul on matchday five that proved decisive in finishing above Galatasaray.

Emmanuel Dennis – The 22-year-old Nigerian, who was scouted by United ahead of the January transfer window, scored both Brugge goals in the Bernabeu and has pace to burn.

Hans Vanaken – Top scorer with 16 goals in all competitions from midfield, although just the one in the Champions League group stage. The 27-year-old is also vice-captain and a leader.

Ruud Vormer – Labelling the skipper a poor man’s Kevin De Bruyne seems harsh, but he is Brugge’s creative spark in central midfield and has 17 assists in all competitions this season. Krepin Diatta – It was the 20-year-old Senegal international who scored the late goal in Istanbul that ultimately put Brugge through to the Europa League knockouts. Another speedy livewire.

Simon Mignolet – The former Liverpool goalkeeper is getting his career back on track at home after leaving Anfield. He is obviously well known and is an outstanding shot stopper on his day.

When Is the Tie Being Played & Where Can I Watch the Games on TV? The first leg is being played at Brugge’s 29,000-capacity Jan Breydel Stadium on Thursday 20 February, with a kick-off time of 5.55pm (GMT).

The return game will take place at Old Trafford one week later on Thursday 27 February, but with a slightly later kick-off time of 8pm (GMT).

Both games are being broadcast live in the UK by BT Sport.