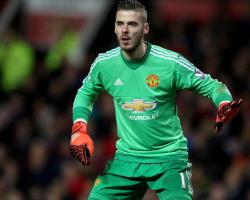 Under a FIFA ruling this week, the Spanish giants will be unable to sign players this summer or in the next winter transfer window due to irregularities.

Real had been expected to renew their interest in the United keeper, who was poised to move to the Bernabeu last summer before the move collapsed at the last minute.

Ahead of United's Barclays Premier League trip to Liverpool on Sunday, Van Gaal insisted: "I don't think that is the kind of thing that plays on the mind of David De Gea.

"I never thought about it in the period before the transfer window and now I am seeing David De Gea who is enjoying to stay here and play good games."

Van Gaal's position will come under renewed pressure if his side lose at Anfield in a game which will see the Dutchman renew his rivalry with Jurgen Klopp.

The pair met four times in the Bundesliga when in charge of Bayern Munich and Borussia Dortmund respectively and Van Gaal believes Klopp is cut out to succeed in the Premier League.

Van Gaal added: "You can see he plays a very aggressive and pressing kind of game and he already knows the difference between the Premier League and the German league.

"He is a very capable manager in the Premier League because he has always showed this kind of football and I think the fans will love it."

Conversely the jury is still out on Van Gaal's own tactics after Tuesday night's dramatic 3-3 draw at Newcastle which appeared to please some fans more than the manager himself.

United's attacking intent came in stark contrast to previous displays but Van Gaal was furious with the way his side threw away a two-goal lead and allowed the Magpies to seize a point in injury time.

Van Gaal added: "I think I was more disappointed than the fans but I say to them we lost two points and two points are very important in this period.

In a game like that you have to win and we were disappointed, but of course the fans have seen a match where we have scored three goals."

Defeat to United's traditional rivals would maybe push Van Gaal closer to the Old Trafford exit door and the Dutchman acknowledged a more determined display will be necessary to take the points from Anfield.

"I have felt it (the rivalry) already four times, on the tour of the USA and in the league

You can see it on the faces of the players.

"We need to be aggressive but also under control

It is that kind of match and it will always be difficult because the passion at play in these kinds of games is always very high."