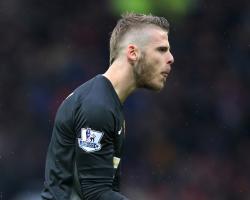 Louis van Gaal handed debuts to all four of his summer signings and one of them - Morgan Schneiderlin - scored the winning goal with an early header.

Memphis Depay, playing in the number 10 roled behind Wayne Rooney, impressed during the first half, and Matteo Darmian made a crucial interception to deny United's Mexican opponents.

Bastian Schweinsteiger, one of 11 half-time substitutions, proved every inch the commanding presence in midfield after his introduction and United, who played in a 4-2-3-1 formation, looked comfortable throughout the first match of their four-game tour.

De Gea had to watch from the stands, with United citing a "minor" injury to the goalkeeper, who is wanted by Real Madrid, just before kick-off.

Van Gaal may have been putting his players through gruelling double sessions this week, but he warned prior to kick-off not to expect too much from his team.

Barely five minutes had passed when they broke the deadlock, though.

Juan Mata lifted the ball to the back post and Schneiderlin guided a looping header into the far corner.

A brief lull followed as both teams struggled to find their rhythm on a heavy pitch that had been extensively watered before kick-off.

Depay was trying hard to make an impression, dropping deep and demanding the ball.

There were a few gasps when Depay was sent flying in the air by a challenge from Rubens Sambueza, who received a caution

But the Dutchman was soon back on his feet

He then slotted a ball through to Rooney, but the skipper rolled a low shot wide

Depay could have helped United double their lead, but he shot at a defender rather than square to Ashley Young, who was clearly unhappy with his new team-mate.

Schweinsteiger made his entrance during the raft of half-time changes.

The German comfortably took to his role at the base of United's midfield, dictating the tempo of a match that Van Gaal's men were controlling with ease.

Andreas Pereira and Adnan Januzaj went close, but Club America then found their feet and pushed for an equaliser.

Alejandro Diaz struck the foot of Anders Lindegaard's post in the 76th minute, but the game then petered out and United recorded a welcome win.