Depay- I want to be a legend 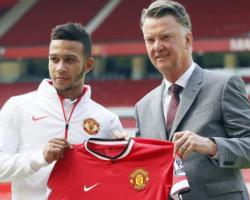 Van Gaal stole a march on his rivals in May when he completed the signing of Depay from PSV Eindhoven for ÃÂ£25million.

Paris St Germain offered Depay a fortune, but once he knew he was wanted by Van Gaal, Depay's mind was made up.

I had already made my decision," the United forward said.

Depay scored 22 league goals for PSV last season and much is expected of him in his first term at United.

He has made a promising start

The coaching staff have informed senior officials at board level that Depay has been scoring some excellent free-kicks in training during United's pre-season tour of the United States, just like he did for PSV.

And in the early hours of Wednesday morning, the 21-year-old scored his first goal for the club in the 3-1 friendly win over the San Jose Earthquakes.

But Depay is an ambitious person

His aims in life are to dream, believe and achieve - the three words tattooed under his right pectoral muscle.

He has plans on becoming one of the best players in United's long and illustrious history.

Former players like Bryan Robson, Denis Irwin and Lou Macari, who described Depay as a "tank", have all been impressed by the 21-year-old and he wants to leave a lasting legacy at the club.

"I am very hungry

I want to be a legend at one time in history," Depay said.

"But the important thing to do for me is to focus on the next game, not to be that far in my head because I have to do my job in every game.

"Maybe one time I can be a legend

I am grateful for that."

Depay has a long way to go before he can be mentioned in the same breath as those United greats.

But he feels he has the perfect person at his side to help him kick off that journey in United manager Van Gaal.

The two know each other well having worked together with the Dutch national side.

Van Gaal gave Depay his Holland debut against Turkey in October 2013 and eight months later he selected the powerful forward in his World Cup squad.

Depay, who prefers to be known as 'Memphis' as he does not want to be associated with his father, who split from his mother when he was four, declined an invitation to describe Van Gaal as a "father figure" during an interview with the British media in San Jose on Wednesday.

But there is no doubt that Depay regards Van Gaal as a brilliant manager who will get the best out of him.

"I don't want to say he is like a father figure," Depay said.

"But he is a great manager

He can make players better.

That is one of the things he can really do to you.

I am very young and I want to do everything better so I become a better player."

Depay has not set himself any personal targets this season, but he has one aim for the team - to challenge for the Barclays Premier League title.

"I think that is realistic

We are Manchester United," he said.

"I think we have real qualities

We have to prove that in the games.

"We have to be creative

The defence has to be strong so we win games and we can play for trophies."