Depay off the mark for United 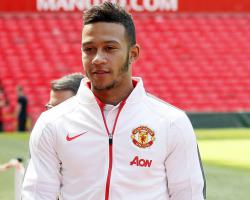 Ferguson would have given Morgan Schneiderlin the hairdryer treatment for his error, which allowed the hosts back into the match after United had gone 2-0 up courtesy of goals from Juan Mata and Depay.

But on the attack, United looked impressive and were well worth their second tour win.

Depay took advantage of a woeful backpass to roll in his first United goal after Mata's chip sailed in at the back post to put the visitors ahead at the Avaya Stadium.

And substitute Andreas Pereira ensured United maintained their 100 per cent tour record with a header after wholesale changes at the break.

The match, very much unlike the first of the tour against Club America, started at a quick pace and Sam Johnstone, in goal instead of the injured David de Gea, had little to do.

Even though the game was far from a sell-out, the atmosphere inside the 18,000-capacity stadium was good

The only time the San Jose Ultras were muted was when a plane landed at San Jose airport, which is over the road from the Earthquakes' home.

Depay provided the majority of the early excitement, turning Jean-Baptiste Pierazzi twice before driving a low shot at David Bingham.

Before kick-off, Wayne Rooney spoke confidently about breaking the 20-goal barrier this season, but he swung and missed at a simple chance in the eighth minute after a good run by Luke Shaw.

United again poured forward down the left, but this time they came up with a goal.

Ashley Young squared to Mata, whose chip floated over Depay's out-stretched leg into the net off the far post.

The Dutchman, rather optimistically, thought about claiming the goal, but decided against it.

There was no doubt the second goal of the night belonged to Depay, though

The ÃÂ£25million signing latched on to Pierazzi's woeful backpass and tapped the ball past Bingham.

United allowed San Jose back into the match just before the break though when Shea Selinas turned Schneiderlin and squared for Fatai Alashe, who tapped in from close range.

Johnstone was the only survivor from the first-half team as United manager Louis van Gaal made 10 changes at half-time.

Pereira, who impressed in Seattle last weekend, timed his run perfectly to nod Jesse Lingard's cross past Bingham and United strolled to another win against poor opposition

Next up for the Red Devils is a match against a much tougher opponent - Barcelona - on Saturday.