Wayne Rooney lining up to face Manchester United has dominated the pre-match conversation ahead of the Red Devils' FA Cup fifth-round tie with Derby County on Thursday night.

The 34-year-old has been shone in midfield in the Championship since his arrival as player-coach and will be raring to take on his former club, with whom he won the competition in 2016. The Red Devils won easily in the fourth round with a 6-0 victory over Tranmere Rovers but will face more resistance against Rams.

Derby may have needed a fourth-round replay against Northampton Town to secure their place in the last 16, but Phillip Cocu's side have been strong at Pride Park this campaign, while they picked up an impressive 3-1 win at Sheffield Wednesday last weekend. They also have previous against United in cup competitions.

Here's 90min's preview of the game.

​Derby have several injuries for Cocu to deal with - particularly in midfield. Both Duane Holmes (ankle) and Tom Huddlestone (hamstring) will be sidelined for the game and join former Arsenal defender Krystian Bielik (knee) who is out for the season. Ikechi Anya has only just recovered from his calf problem and will be a doubt for the Rams.

However, the big talking point ahead of the game is Manchester United's all-time top scorer ​Wayne Rooney, who will likely start against his old club as skipper for the ​Championship club. As for ​Man Utd, they have several injuries of their own to contend with. ​Paul Pogba (ankle) is unlikely to play, with this game coming too soon for him to make an appearance. Young defenders Axel Tuanzebe and Timothy Fosu-Mensah are both suffering from thigh problems and will need more time to build up their fitness before being considered by manager Ole Gunnar Solskjær.

Veteran goalkeeper Lee Grant is also out, as is striker ​Marcus Rashford (back) with both considered long-term absentees. Winger Daniel James has a knock which forced him to miss the game against ​Everton and is a doubt to play.

These two teams have a recent knack for meeting each other in cup competitions. Their most recent encounter was last season where a 2-2 draw at Old Trafford in the Carabao Cup third-round resulted in a penalty shootout, which Derby won 8-7, as Phil Jones missed his spot-kick. 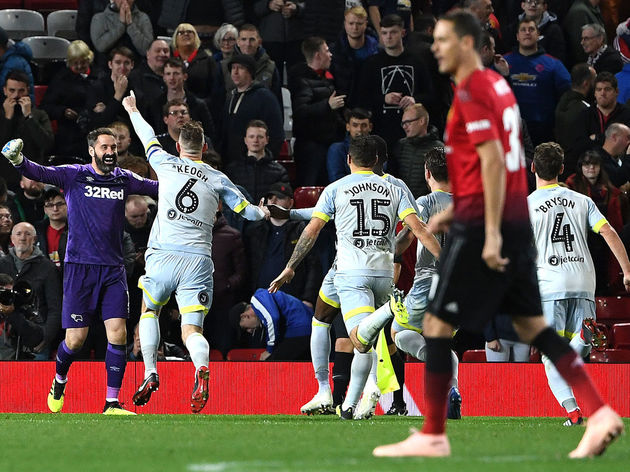 Of the 107 games between these two teams, Man Utd have won 46 of them, while the Rams have 32 victories.

The Red Devils have won three of the last five games played at Pride Park, most recently a 3-1 win in 2016.

Derby are on a mixed run of form currently. A 1-1 draw at home to high flying ​Fulham was followed up by an away 2-1 defeat at ​QPR. Yet they recently travelled to Sheffield Wednesday and picked up a 3-1 victory, which will give Rams fans hope they can back up that impressive display with another on Thursday. Man Utd haven't lost since January but faltered at the weekend away to Everton.

Having won 3-0 and 5-0 at home to ​Watford and Club Brugge respectively, they then shared a ​1-1 draw at Everton with an off-par performance.

Here's how both sides have fared in their last five games.

Derby are coming off an impressive win on the weekend and are one of the Championships strongest sides at home, having only lost twice at Pride Park this season in the league. Meanwhile, attacking ex-United duo Rooney and Tom Lawrence are in fine form, with the latter scoring twice in the win over Sheffield Wednesday.

However, Man Utd are still Man Utd. While Solskjær continues a quietly impressive patch of form, helped immensely by the talents of Bruno Fernandes, the FA Cup looks like - along with the Europa League - the Red Devils' best chance of silverware this season. Derby should provide a stern test as they enjoy another cup run, but ultimately they should lack the quality to stop the ​Premier League club from advancing.