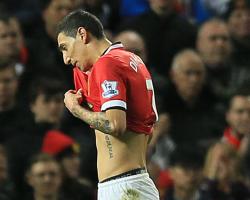 United's tour of the United States ended on a disappointing note in the early hours of Thursday morning as they lost 2-0 to PSG in Chicago.

Despite being named in United's party for the final stage of United's tour, Di Maria was not in the matchday squad.

In fact, the 27-year-old's whereabouts remain a mystery to his manager Louis van Gaal.

The Dutchman claimed he had no idea why Di Maria did not report for duty in the States as expected last Saturday and his stance had not changed when asked about the ÃÂ£59.7million midfielder on Thursday.

"I don't know where he is," the United boss said after a blunt exchange in his post-match press conference at the Soldier Field.

"You can ask that every week but I don't answer that question."

The only other comment Van Gaal made was when he was asked by a reporter from Kurdistan where Di Maria's next club would be.

"He is not going to Kurdistan," Van Gaal said.

Blanc was slightly more forthcoming on the matter.

The PSG boss believes the protracted transfer saga surrounding the former Real Madrid player is finally coming to an end.

"Manchester United and PSG are two big clubs and negotiations can be difficult but we are close to the end," Blanc said.

Reports in France claim PSG will pay around 65 million euros (ÃÂ£46million) for the Argentina international, who failed to settle at United last year.

The midfielder's form dipped alarmingly after a strong start and he had to move out of his Cheshire home after an attempted burglary in February.

Di Maria is not the only problem Van Gaal has at present.

Goalkeeper David De Gea has also been the subject of intense transfer speculation this summer.

United are adamant they will only do a deal with the 10-time European champions if they get defender Sergio Ramos in return.

With Ramos said to be close to signing a new deal with Madrid, De Gea's move looks further away than ever before.

Van Gaal only played the Spaniard for the opening 45 minutes of United's defeat in the Windy City and he put in a poor performance, hesitating when coming off his line for Blaise Matuidi's opener and being easily beaten from close range by Zlatan Ibrahimovic for the second goal.

Van Gaal has praised De Gea's attitude on two occasions this summer, but the Dutchman appeared to hint that all was not well with the goalkeeper after the defeat to PSG.

"We have a situation that is not favourable for David De Gea, neither for us and neither for the club that, maybe, he wants to go," Van Gaal said.

When asked what the best solution was for all parties, Van Gaal added: "We have to wait and see

It is the same question as your predecessor."

He said on Sunday: ''I think that in our circumstances, with the threat that David De Gea is going to Real Madrid, we have to prepare our season and I think Sergio Romero can fulfil that because you have to handle it very quickly when it may happen with David de Gea."

Van Gaal refused to chastise his players for their weak defensive showing in Illinois.

"It's better when you win but I was rather satisfied," said the 63-year-old, who guided United to victory in their first three tour matches.

The Dutchman and his squad flew back to Manchester directly after the game in Chicago.

United's next match is their first game of the Barclays Premier League season against Tottenham at Old Trafford on August 8.