Di Maria expects United to turn on the style against QPR 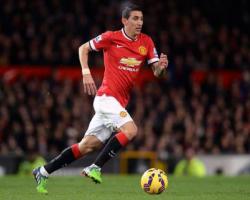 The minimum United supporters expect from this campaign is for the club to secure a return to the Champions League.

The Red Devils are currently fourth in the Premier League table -- the last Champions League qualifying spot on offer to English clubs -- ahead of their clash away to relegation candidates Queens Park Rangers at Loftus Road on Saturday.

However, Van Gaal has received some criticism in recent weeks for a more direct style with long balls, although Di Maria claims the players have complete faith in the Dutchman's approach.

"We're focusing on growing as a team," said the Argentina international.

We weren't so great at the beginning but we've started getting a few victories under our belt.

"There are some people saying that we're not playing in a particularly good style, or that's not the old Manchester United

But it's not, we're beginning something new here.

"We're working hard and getting as many points as we can

We all know the Premier League is difficult but all we're focusing on now is meeting our objectives and our targets for the season."

Di Maria has only recently returned from a spell on the sidelines with a pelvic injury and said he was desperate to make up for lost time.

"When these things happen, it is unfortunate but, that said, the important thing was that when I came back," he explained.

Van Gaal is set to give a fitness test to Netherlands striker Robin van Persie, who is struggling with an ankle problem

Colombia forward Radamel Falcao is set to return to the squad after he was left out of United's matchday party for their surprise 1-0 loss to Southampton last time out.

Meanwhile, QPR striker Charlie Austin has insisted speculation over his future will not distract him from the club's survival bid.

The 25-year-old is the highest-scoring Englishman in the Premier League so far this season, with 13 goals in 19 games.

Austin has 18 months left to run on his deal and has been linked with a move away Loftus Road.

QPR would like to tie the player down to a longer deal, but Austin has indicated he is prepared to wait until the season is over before deciding whether to stay with the west London club or not.

Harry Redknapp's side are fighting for their lives at the foot of the table and Austin stressed nothing would distract him from his efforts to help the Hoops beat the drop.

"I'm very happy here and fully focused on the battle ahead," the former Burnley striker said.

Austin will be looking to add to his goal tally when Rangers, yet to win away in the league this term, face United this weekend.

The Hoops are currently second bottom, but a win over United could lift them as high as 12th in the table.

Defender Steven Caulker added: "The table is so tight

To concede so late on against Swansea recently was really tough to take because we knew those two extra points would have us sitting in mid-table, but that's the swings and roundabouts of football.

"This United game is a big one for us

At home our form in the league has been good and we want to maintain that."