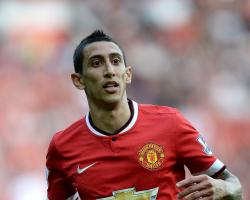 Angel di Maria failed to board his flight to the United States and therefore did not join Manchester United's pre-season tour party on Saturday, Louis van Gaal has revealed

Di Maria, subject of serious interest from Paris St Germain, was due to meet up with his United team-mates in San Jose on Saturday.

But the British record signing did not catch his plane to California, which will fuel speculation his move to PSG is moving closer.

"No," the United manager said when asked if Di Maria had flown to San Jose.

"I have heard he is not on the plane

I cannot say anything

He was not on the plane."

United have refused to comment on reports in France that they have agreed to sell the Argentina winger to the Parisian club for 65 million euros (ÃÂ£46million).

But the unsettled 27-year-old was not in the US for Saturday's 3-1 win over Barcelona in Santa Clara and neither was Marcos Rojo, who had been also been given extended leave following the Copa America.

The only person who reported for duty who was supposed to was Javier Hernandez, who was playing for Mexico in the Gold Cup.

"Marcos Rojo was also not on the plane

"That I do know

But for Di Maria I do not know why

United maintained their 100 per cent tour record thanks to goals from Wayne Rooney, Jesse Lingard and Adnan Januzaj at the Levi's Stadium, home of the San Francisco 49ers on Saturday night.

Matteo Darmian, Luke Shaw and Ashley Young performed well in the morale-boosting victory against the European champions in California.

David de Gea also put in a strong performance on his first outing of the summer.

The Spaniard, who is wanted by Real Madrid, denied Sergi Roberto a goal when the Barcelona midfielder was clean through in the first half, and grew in confidence from there on.

After the final whistle, Van Gaal heaped praise on his goalkeeper, who has been out with a back injury, and reiterated that he wants him to stay at Old Trafford for next season despite Madrid's interest.

"Of course I do hope that David de Gea shall stay but in this world of football you never know," Van Gaal said.

"In spite of his injury he doesn't train for one week, he can show his quality already in this game.

"He has showed his quality.

"The first chance was for Barcelona

When you stop the first chance, then you can score the first goal, which we did

That is always the difference in the game."

Barcelona did not have Lionel Messi or Neymar in their team, but United still did well to negate the threat of Luis Suarez, Pedro and Rafinha.

They rode their luck at times, though

Van Gaal said Barca could not deal with the danger posed by Rooney and Memphis Depay, who played in the number 10 role just behind the skipper.

"I think they are always a threat," Van Gaal said.

"That is very important

Barcelona could not cope with the threat of Depay and Rooney."

Van Gaal also found time to praise Januzaj, who scored United's final goal in injury time after coming on as one of 11 changes on the hour.

"He always gives an option for his midfielders and defenders and scored a wonderful goal."

Luis Enrique said if it was up to him, Barca would not have even played the match in the US.

"As a coach I would prefer not to do tours

I would prefer to stay closer to home," said the Barcelona manager, who now takes his team to Washington DC to face Chelsea.

United, meanwhile, will round their tour off against PSG in Chicago in the early hours of Thursday morning.