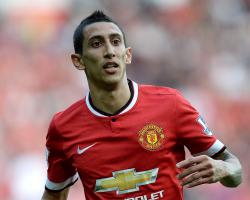 PSG are interested in signing Di Maria, who endured a difficult first season at Old Trafford following his ÃÂ£59.7million move from Real Madrid.

United have refused to comment on reports they have agreed a fee of 65 million euros (ÃÂ£46million) with the French champions for the Argentinian, who has struggled to settle in the Manchester area following an attempted burglary at his Cheshire home in February.

But they were all due to report for duty on July 25 and that still remains the case despite speculation a deal for Di Maria is almost done.

"I expect them (Di Maria, Rojo and Hernandez) here tomorrow," the United manager said at a press conference in San Jose on Friday.

"We have communicated (with them) and they have responded to that."

Van Gaal refused to discuss whether Di Maria is leaving for PSG.

"I am not answering questions about transfers or the process in transfers," the Dutchman said.

Di Maria will not be considered for United's third pre-season game, which is against Barcelona at the Levi's Stadium in Santa Clara on Saturday.

"For the (Barca) game he cannot play because we have to build him up," Van Gaal said.

"When you come out of your holidays you can't play immediately so that is out of the question."

Interestingly, United's fourth and final game of the tour is against PSG in Chicago on Thursday morning.

Another United star who has been linked with a move away from Old Trafford is David de Gea.

The goalkeeper is wanted by Real Madrid, but United are refusing to deal with the 10-time European champions unless they get Sergio Ramos in return.

De Gea missed the first two games of United's tour through injury, but trained with the first-team on the eve of the Barcelona match and looks set to feature against the Spaniards.

"He shall play tomorrow," Van Gaal said of De Gea

United are willing to play hardball with Madrid over De Gea

They would be happy to let the goalkeeper's contract run out if they meant they got another year's service out of their two-time player of the season even though they would lose him on a free next year.

Although De Gea has missed the first two matches of the tour, Van Gaal is hopeful the 24-year-old will be fit for the start of the season.

"When a player is injured you have to wait and see, but I give them time to recover and build up their fitness," Van Gaal said.

"It is still possible (he will be fit to play against Spurs on August 8) because he shall play tomorrow."

One player who is unavailable for the Barcelona friendly is Bastian Schweinsteiger.

"He cannot play because he had a little injury," Van Gaal said of the ÃÂ£15million summer signing.