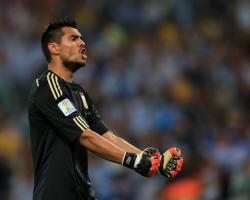 The World Cup & Copa America finalist is free to sign for another club after being released by Sampdoria at the end of last season.

United are in the market for another back up shot stopper after Louis van Gaal publicly stated that current number two Victor Valdes is likely to leave the club for not following his 'philosophy'.

And now, reports from Spain (translation required) suggest that Romero is set to announce his United deal after completing a medical in England within the past few days

As yet there are no details about the players potential deal at United, but he'll likely be on a high wage with the Red Devils having to fend off interest from Italian giants AS Roma.

Although fresh reports from Italian football expert Omid Zamani say that Roma have now pulled out of the race for Romero, with the club unable to match United's offer.