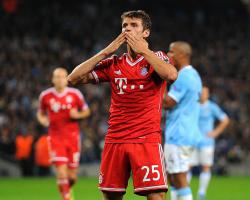 Senior sources at the club denied United had made a ÃÂ£70million bid for Muller last week, but the German World Cup winner is a player Louis van Gaal would be interested in if he became available.

But, according to Bayern chairman Karl-Heinz Rummenigge, Muller will not be leaving the Bundesliga champions this summer.

''There are some players who just don't have any price tag,'' said Rummenigge, who has already lost Bastian Schweinsteiger to United this summer.

''We would be out of our minds to sell Muller.''

United also look to be facing disappointment in their pursuit of Ramos.

United are willing to swap David de Gea for the Spanish centre-back, who is at loggerheads with Madrid over the terms of a new contract he has been offered.

According to Rafael Benitez, his captain will not be leaving the club.

''I have a lot of respect for Louis van Gaal, but Sergio will be staying with us,'' the Real Madrid manager said at a press conference in Australia prior to the team's friendly against Manchester City

''He is our player, our captain

I would like to see him (at the club) at the beginning of the season, because he's a key player for us.''

When asked whether he was absolutely certain the centre-half would stay, Benitez said: ''For me, 100 per cent.

''I insist that it is clear for me and the club, Sergio will be here

Football is a curious world, but Ramos will be staying.''

The one player United may have more success in procuring is Barcelona's Pedro.

The Spanish forward is on Van Gaal's wishlist and is said to be having "doubts" about his future at the Nou Camp after realising he has little chance of dislodging Lionel Messi, Luis Suarez or Neymar from Luis Enrique's all-conquering side.

''I have spoken with Pedro,'' Barcelona midfielder Sergio Busquets told a press conference in San Francisco ahead of the team's friendly against United.

''I think that as a team-mate and friend, I would like him to stay for a long time, but I understand that he has doubts.

''He wants to play but there is a lot of competition

In our team we have the best players and it's very difficult (to get into the team).

''I hope he stays but the decision is his.''

United executive vice-chairman Ed Woodward is likely to cross paths with his Barcelona counterparts this weekend when the two teams meet at the Levi's Stadium in Santa Clara.

Press Association Sport understands Woodward flew back to the United States on Thursday to rejoin the tour.

It was always planned that he would return for the second leg in California and is expected to attend United's game against Barcelona.