From Bulgaria with love- Dimitar Berbatov 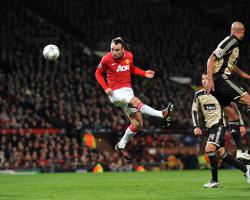 ÃâA man must face the world with sprezzatura

It literally means detachment, but a better way to think of it is quiet confidence or low key style

The most forceful statement is understatement.Ãâ Luciano Barbera

Dimitar Ivanov Berbatov; erudite yet nonchalant footballer, suave gentleman off the pitch with the grace of a Robert de Niro and Al Pacino love child, wears a suit like a Ãâkerchief on a countrysideÃâs chambermaidÃâs head.

The vivacious Tottenham supporters knew, Martin Jol knew it and the world knew it, the unhurriedness of the goal, the simplicity and the far away look of almost boredom of the man who conjured it was telling, a microcosm of the footballer, of the man.

He modeled his game alongside the lanky ball of elegance that is Marco Van Basten, game recognizes game

That alone showed what Dimi valued in football; he enjoyed the subtle wizardry, the fun in elegance, the hint of a dribble

Pace and power, the quintessential English power-breakfast of many in the football industry were the furthest facets from Dimitar BerbatovÃâs almost puritan approach to the game

The game always seemed to slow down to a trot in and around him when he had the ball, as if the opponents were in a trance, spellbound and hypnotized by his delicateness on the ball, beguiled by how he fondled the ball though barely touching it

Was it his body movement? Was it the ball? I havenÃât a clue, his touch was so impeccable it reddened Wayne RooneyÃâs already rosy cheeks just to think of it, but he didnÃât always touch the ball, he cajoled it forward gently as if a mother encouraging a babe to take itÃâs first step.

He was so sublime he was kidnapped by Bulgarian Mafia boss Georgi Iliev in order to convince him to sign for his own team Levski Kjustendil, he is that good

By his own admission he learnt how to speak English by watching the Godfather trilogy and he still retains the thick accent from his hometown of Blagoevgrad, it is hard to not to think of him as a Bulgarian Michael Corleone what with the easy going suave nature and almost perfect gentlemanly manners.

His history has been written about, his style much vaunted and discussed, his footballing prowess somewhat divisive but only the most insular football fan hasnÃât been enchanted or doesnÃât acknowledge the almost throwback style of player encapsulated by Berbatov the man who seems to have been born in a wrong era, a wrong culture

Hounded out by the English media for his supposed lack of effort, the media so blind sided by the rough and tumble chaotic league around them they couldnÃât appreciate a true connoisseur of the game, a one off journeyman who needed to be accommodated to unleash his Einstein but was more often than not pitch forked like a Shrek while the Shrek lounged right under their bile laced pens.

Misunderstood genius are few and far apart, in his element Berbatov influenced more games than many care to admit

Perhaps the only manager to ever fully appreciate him was Martin Jol who allowed him the freedom of the green, a prolific deep lying forward

What he lacked in actual pace he more than made up for mentally, the ability to spot runs and find the runners with the most inventive balls; lofted, slid, outside of the boot, no look, threaded, he had no right to deliver them but he duly did.

He scored his fair share of stunners too, maybe itÃâs his detached ability regularly termed as inconsistency that denied him entry into the halls of the Premier LeagueÃâs finest

Left out of the Champions League final against Barcelona after languidly picking up a golden boot to boot had to be a dagger to his ego, yet not a word of complaint via the media escaped his lips, classy to a fault

A watered down Michel Angelo in real life, it is on the pitch that fans of the various clubs where he passed by will always remember him serving the subtle hors dÃâoeuvres during matches before going on to the main course and grabbing games by the scruff of the neck.

ÃâStyle is when they are running you out of town and you make it look like youÃâre leading the paradeÃâ.