​Gareth Southgate has relieved anxious England fans by revealing that Harry Kane and Marcus Rashford could return from injury in time for the European Championships.

Both strikers are currently nursing long-term issues that have been unwelcome additions to their respective outfits' plights, with Kane suffering a nasty hamstring injury while Rashford sustained a stress fracture in his back. Both initially looked like being out for the entire season.

Those with no allegiances to ​Tottenham or ​Manchester United have found themselves in a bizarre limbo since ​Kane and ​Rashford were sidelined. On one hand, it benefits the other sides in the Premier League, but on the other, England fans are fully aware that if the pair don't get back in time then the Three Lions' Euro 2020 chances will take a significant blow. Enter Southgate.

“We’ve had really good updates right the way through and Harry and Marcus are exactly where we were expecting them to be,” Southgate said, via ​The Guardian. “Both players will give themselves the best possible chance of being available, that’s their mentality and that’s their dedication to their sport.

“That’s the only bit we can guarantee, what we can’t guarantee is how that rehab will develop as it’s stepped up and as it becomes more intense. But they are both on track from the information we were given at the very start.”

Just who will be available to lead the line has been cause for concern, but there are other areas on the pitch that remain unsolved ahead of the summer. In goal, ​Jordan Pickford added another mistake to his collection of calamities during ​Everton's recent draw with United, but Southgate (worryingly) offered his backing to the under-fire stopper.

“His performances for us throughout have been outstanding,” the manager insisted. “I think he has been a key part of some big results we have had. I think that is clear to everybody but in goal, if you are the England goalkeeper, you are under the spotlight. I am expecting him to bounce back. 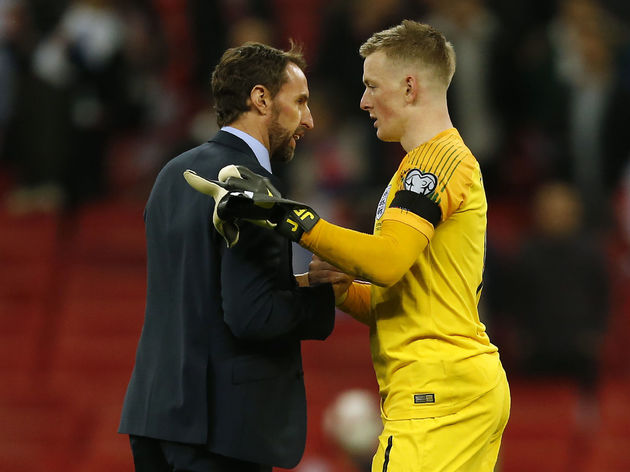 "The weekend goal is one he would want to do better with but then he had some outstanding saves at the end of the game. That is the life of a goalkeeper.”

There are still places up for grabs in the England squad, with form, injury and experience all being factored in by Southgate before Euro 2020 kicks off. The latter of those is something Phil Foden doesn't possess on the senior international stage, but his recent outings have prompted Southgate to leave the door open for the ​Manchester City starlet.

He concluded: “The door’s open for everybody. We’ve got 70 English players in the league and when they’re of the quality of a player like Phil then of course the door’s open.”