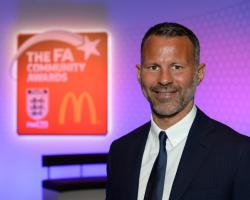 Pogba found the net nine times last season after rejoining United in a then world record ÃÂ£89million deal, with five of those in the Premier League.

That was a creditable return given the France international was often deployed deeper than his preferred position, with greater emphasis on defensive duties than many expected.

But the arrival of midfield anchor Nemanja Matic from Chelsea this summer suggests Jose Mourinho could hand him a more advanced role this term and Red Devils great Giggs expects Pogba to be a regular on the scoresheet.

Speaking at the FA and McDonald's Community Awards, Giggs told Press Association Sport: "I expect Pogba will improve a lot this season

"That's what you want to see from Pogba, getting on the end of crosses and scoring goals

He managed nine last year and hit the crossbar and post plenty of times as well, so he can bring the goals that might turn draws into wins and have a real effect on the team.

It would be silly to dismiss Chelsea after the way they played so dominantly last year but looking at the teams, I think City and United will be up there and the teams to watch."

United face Real Madrid in the UEFA Super Cup final in Skopje on Tuesday, bringing United into contact not only with Jose Mourinho's former club, but also with perpetual transfer link Gareth Bale.

The 28-year-old has frequently been linked with a move to Old Trafford in recent seasons and, although the chances of a move this summer appear distant, it is a switch which could one day be on the cards according to fellow Welshman Giggs.

"I don't think it will happen in this transfer window but you can see it happening one day," he said.

"That's why the speculation happens every year but I maintain what I've always said, I think he's happy at Madrid

It's not impossible but he's playing at one of the biggest clubs in the world and if he's enjoying himself and playing regularly I don't see it happening."