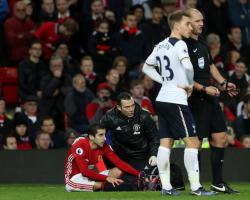 Initial struggles following Mkhitaryan's summer move from Borussia Dortmund have been forgotten in recent matches, with the 27-year-old flourishing when finally given the nod

He produced his latest man-of-the-match display as United ended a run of four Premier League home matches without a win, with his thumping first-half strike enough to secure a 1-0 victory against Tottenham on Sunday.

However, elation was replaced by anxiety as the Armenian's afternoon was cut short following a late Danny Rose challenge.

Mkhitaryan left the field on a stretcher but Mourinho expects his ankle injury to only keep him out for a couple of weeks.

"The injury doesn't look like a big one," the United manager said

"It doesn't look like one needing surgery or months of recovery

"It depends always on the player - anatomy, physiology, mentality - but hopefully it is not a big thing."

Mourinho was also relieved to see United finally back-up a promising display with a Premier League win, reeling in the top four a little.

"To be honest, after so many matches playing well but not winning, we need the points more than the performance,'' Mourinho said.

"But I knew against a team like Tottenham it is difficult to get the result without playing well, so we played well

"Tottenham, for me, is a very complete team

They defend well, they attack well, they build well from the back, they press well when they lose the ball

I think they are very complete.

"So to win against them, you need to play very well, which we did."

Mauricio Pochettino is frustrated to be approaching that match with defeat, but was not too downbeat given Spurs' display at Old Trafford.

"Well, I think it was an even game, very competitive,'' the Tottenham boss said.

"I think we are a little bit disappointed

Disappointed with the result at the end, not our performance.

"We can play better but I think we competed here in a difficult game.

"Now (we need) to try and improve

We need to be ready on Wednesday for another game, but I think it was an even game."

Spurs midfielder Mousa Dembele looks a doubt for Wednesday's return to action due to a foot complaint.

"We don't know now," Pochettino said when asked about the severity of his injury.

"We need to assess him

He received a kick to his foot, but we don't know

We will see tomorrow."