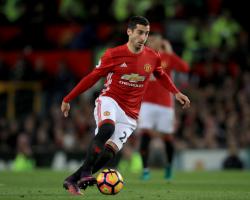 Initial struggles after a summer move from Borussia Dortmund appear to be a thing of the past, with the 27-year-old impressing on his return to a country where he plied his trade for Shakhtar Donetsk.

Mkhitaryan's fine goal and a late Zlatan Ibrahimovic strike saw already-eliminated Zorya beaten 2-0 as United ended a seven-match wait for an away win in Europe and finished second in Group A.

Fenerbahce's win at Feyenoord means Jose Mourinho's men will be unseeded for Monday's last-32 draw, but progressing unscathed will be a relief after so much concern about the Chornomorets Stadium pitch.

Players complained of the surface being like rock as their studs clacked on the frozen surface on the eve of the match in Odessa, but UEFA deemed it playable after overnight heating and two pitch inspections.

It may not have been frozen but it was patchy, leading to an underwhelming first half in which United's goal at times looked under threat - and not just from the firecracker that landed worryingly close to goalkeeper Sergio Romero.

UEFA will no doubt look at that along with the laser pen, flare and skirmishes on a night when Mkhitaryan's moment of inspiration early in the second half broke the deadlock.

The Armenian picked up the ball just inside the Zorya half and bounded forward before slotting home, with Ibrahimovic's seventh goal in six matches wrapping up victory.

This was always likely to be an uncomfortable evening for United, with the conditions compounded by a well-drilled Zorya side who restricted Mourinho's men to a 1-0 win at Old Trafford.

The Ukrainians were already out heading into the final match but spoke of making history in the build-up, with Ihor Kharatin close to making himself a hero with a fine eighth-minute snapshot that Romero did well to save.

It came during a period of United pressure that saw Ander Herrera get away a fizzing shot comfortably dealt with by goalkeeper Igor Levchenko, who will have been relieved to see a 20-yard Paul Pogba effort whistle into the side-netting shortly afterwards.

However, Mourinho's men were struggling to break down the hosts on the whole, with loose passing and poor decision-making becoming an increasingly prevalent theme.

United needed shaking into life, but not by a firecracker.

A loud bang shook those inside the Chornomorets Stadium, none more so than Romero after a firecracker landed in the United six-yard box.

Olexandr Karavaev fizzed an effort just wide of the Argentinian's goal when play resumed, with Eric Bailly seeing an attempted overhead kick saved before Wayne Rooney was denied at Levchenko's near post.

The 31-year-old, searching for a record-equalling 249th United goal, was denied from distance by the Zorya goalkeeper, with Marcos Rojo trying his luck before the break.

There were skirmishes at half-time as locals stole a few United flags, displaying them just before the second half began as they let off a flare.

A number of those hardcore Zorya fans were soon taking photos after Mkhitaryan broke the deadlock.

The former Shakhtar Donetsk playmaker broke from the centre circle and made a bee-line for goal, all too easily bursting into the box past Rafael Forster and coolly slotting home three minutes after the break.

It was a fine goal that Ibrahimovic attempted to add to, only to be thwarted at his near post, as emboldened Zorya became an increasing attacking force, albeit without testing Romero until the 73rd minute.

A free-kick from the left was met by a glancing header from Mikhail Sivakov, testing United's goalkeeper from close range, before Marouane Fellaini attempted a header of his own.

United ended the stronger as Pogba and Tim Fosu-Mensah threatened either side of Ibrahimovic's late goal.

Collecting a through ball from Pogba, the Swede's experience and composure showed as he curled home.