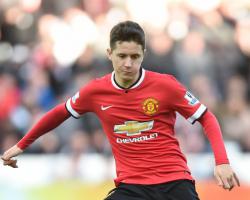 After a difficult start, Herrera ended his debut season at United on a high last term.

The Spaniard became a regular in Louis van Gaal's first team, but he will have to fight harder for a place in the starting XI this year following the arrival of Schweinsteiger and Schneiderlin for a combined total of ÃÂ£40million.

Herrera is convinced he will still get plenty of time on the pitch for United this term, despite the midfield additions to the squad.

"We want to play in the Champions League, fight for the FA Cup and the Premier League," Herrera said.

"When you want to make a good season, it's not just with 11 players.

"I wish there were not but there are injuries

And there are good and bad moments for the players so everyone is going to be involved in what I think will be a very good season."

Very few believed United would be able to prize Schweinsteiger away from Bayern Munich, but Van Gaal managed to persuade the 30-year-old to swap Bavaria for Old Trafford.

That gave Herrera the chance to play alongside a player who he has looked up to for years - a man he believes is one of the top five midfielders on the planet.

"He is someone I looked up to coming through the ranks," Herrera said.

"He is one of the five or six best midfielders in the world and of course I have to learn a lot from him, Michael Carrick and others.

I'm sure I am going to learn a lot of things from him."

"He's always safe with the ball," Herrera said, when asked why he rates Schweinsteiger so highly.

"He always knows what is happening behind him and I have to learn that from him."

Van Gaal started with Schneiderlin and Carrick as a holding midfield pair for United's first two tour matches of the summer.

But Herrera and Schweinsteiger have been introduced at the break in both games and Van Gaal has assured the players he is yet to make up his mind about the starting XI for the season-opener against Tottenham next month.

"Nobody is secure with his position in the team," the United manager said after the 3-1 win over San Jose Earthquakes on Wednesday.

"Every player who comes I have said that

You have to win your position on the pitch

I don't know yet which players shall play against Tottenham

That is the game we need to win."

Van Gaal hopes the format of this summer's tour will help his men avoid the poor start that cost them so badly last season.

United took just 10 points from their opening 13 games after a whirlwind tour that saw them take in five cities across three weeks.

The Dutchman is sure this year's shorter tour will help prepare his players better for the season ahead.

"Yes, this year's tour is better," said Van Gaal, who watched his team kick off their tour with a 1-0 win over Club America in Seattle last weekend.

"We are now at the west coast

The temperature is better

The humidity is better

The training facilities are better

It was superb in Seattle.

"I hope this build-up is better and that we win the first match against Tottenham."