Manchester United's top four hopes came to an end on Sunday as they were held to a 1-1 draw away to Huddersfield in the Premier League.

United took the lead just seven minutes into the game as the ball broke for Scott McTominay on the edge of the Huddersfield area. The midfielder engineered some space before unleashing a shot which squirmed under Jonas Lossl, who reacted poorly despite what should have been a routine save.

Rather than press for a second after going ahead, it was ​Huddersfield who applied the greater pressure for the remainder of the first half, forcing a fine save from David de Gea, though Paul Pogba hit the bar just before the interval with an improvised header.

​United showed steady improvement in the second half but Huddersfield continued to threaten, and it was the hosts who scored next as Isaac Mbenza broke clear of the visitors' frail backline before slotting through the legs of De Gea to level the scores. United pushed for the winner late on but the home side held firm to secure a well-earned draw at the John Smith's Stadium.

Huddersfield have long been down and out at the foot of the Premier League table, and little could have been expected of the Terriers ahead of a clash with top four-chasing Manchester United, but Jan Siewert's side showed admirable fighting spirit on Sunday.

United's early opening strike could have effectively put the hosts out of the contest almost from the outset, but Huddersfield showed positive intent going forward and managed to trouble the visitors' backline on multiple occasions.

Everybody else: Huddersfield, the worst team in the Premier League this season. This should be a winnable game for Man Utd.

The Red Devils were essentially their own worst enemy for some sloppy errors which encouraged the home side to get after them, but Huddersfield deserve some credit for accepting the invitation and ensuring that United would not enjoy a comfortable afternoon.

In what was Huddersfield's final home game in the Premier League ahead of their relegation to the Championship, it was their last chance to go out on a positive note, and a spirited response to going behind was perhaps the best their fans could have asked for against United. STAR MAN - Huddersfield turned in one of their strongest team performances of what has been a dismal campaign with a resilient response to going a goal down early on against United, it was Isaac Mbenza who led the fightback and took the game to United with his forward bursts.

The Terriers showed plenty of spirit and desire to get after United for large parts of the game after going a goal down, and Mbenza's energy and determination epitomised everything that the home side did well on Sunday. The forward's equalising goal was a just reward for a strong showing at the John Smith's performance.

Despite getting off to the best possible start with an early lead, United largely struggled to build on their advantage. Ole Gunnar Solskjaer's side lacked invention in possession, were short of cutting edge and often fell completely out of shape at the back.

A clash away to the Premier League's basement side appeared to be a clear opportunity for the Red Devils to turn in an emphatic attacking display but, in truth, it was often Huddersfield who appeared hungrier and pressed to cause the visitors problems at the John Smith's Stadium.

United's backline struggled once more against an attack which never looked likely to cause too many problems, but some unconvincing play at the back gave Huddersfield unnecessary encouragement to get back into the game.

Solskjaer made a couple of bold calls with his team selection, drafting ​Alexis Sanchez in for his first Premier League start in two months, whilst Scott McTominay was selected ahead of Ander Herrera. In truth, no United player truly took their chance on Sunday to cement their place.

Rashford has done nothing in over a month and how Ole doesn’t see that Young can’t cross is beyond me. Must be somebody at the club who can play rightback?! #HUDMUN #ManUnited

Genuinely comical. We are absolutely awful. I don’t care if we score 18764926 goals in the next half an hour. We are a bad football team full of players that should never wear our badge ever again. Utterly dreadful. #MUFC

If one pattern of play could some up our season it would be that pointless Ashley Young ball down the line to absolutely no one! #mufc 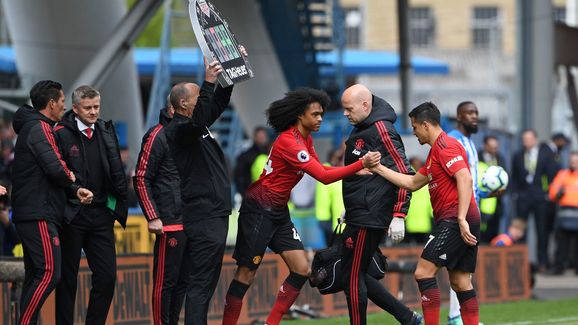 STAR MAN - In what was a generally uninspired performance from a flat Manchester United side, it was Scott McTominay who arguably did the most to justify his selection with any kind of impact for the Red Devils.

Despite being unable to inspire his side to a stronger performance, McTominay fired home the goal to hand United the initiative that they hardly deserved early in the game, and was one of few Red Devils players who showed any real fight or desire to make the difference.

McTominay the best midfielder we have. Imagine my shock when Jose Mourinho, one of the best managers in the world knows better than the fans. #MUFC

Huddersfield take on ​Southampton next Sunday in their final Premier League game before they drop back down to the Championship next season, whilst Manchester United host relegated ​Cardiff at Old Trafford in the final game of their campaign.