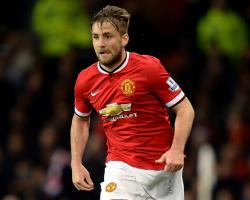 Much was expected of Shaw last term after his ÃÂ£28million move from Southampton, but the left-back had a season to forget.

Louis van Gaal castigated Shaw for turning up to pre-season out of shape, and once the campaign was under way, the defender was sidelined by ankle, head and hamstring injuries.

The England international gave up part of his summer this year, taking a fitness coach with him to Dubai for a week in order to make sure he was in good condition for the start of the season.

The 20-year-old has impressed so far on United's pre-season tour of the United States and Irwin has high hopes for the player in the upcoming campaign.

"Last year was a bit difficult for him injury-wise, but I know he has worked really hard over the summer and I am expecting Luke to really push on this season," Irwin told Press Association Sport at a Special Olympics event in the US organised by United sponsors AON.

"He is still young so he will still make mistakes but hopefully he will stay injury-free, get a good pre-season under his belt and then he will be up and running.

"He's had a whirlwind two years

He broke into the Southampton team at a really early age, exploded on to the scene, and went to the World Cup, and then joined Manchester United.

"I think he is a fantastic player.

"He needs to stay injury-free and get a run of games under his belt to get his confidence high and then we will see the best of Luke Shaw."

Like Irwin, Van Gaal has supreme faith in Shaw so the United boss has felt no need to sign another left-back this summer.

Memphis Depay, Morgan Schneiderlin, Bastian Schweinsteiger and Matteo Darmian have joined for a combined cost of around ÃÂ£80million.

For Irwin, the ÃÂ£15million signing of Schweinsteiger from Bayern Munich stands out the most.

"He is a serial winner," said the former left-back, who played 529 times for United.

"He has won so may Bundesliga titles with Bayern Munich, he has over 100 caps, played 500 times for Bayern Munich so that experience will be vital.

"He has been around the block, he knows exactly how to win trophies, he is a leader and you can tell that on the field."

Despite Irwin's optimism, Schweinsteiger has not had the best tour so far

He will get a chance to put himself back in the manager's good books on Saturday when United take on Barcelona at the Levi's Stadium in Santa Clara.

United's next and final stop in the US will be Chicago, where they play Paris St Germain.