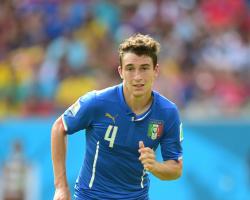 Darmian has been linked to United this summer and Sky Italia say an agreement has now been reached between the two clubs for the Italian defender to move to Old Trafford.

When asked about Darmian's reported move to the Barclays Premier League, Ventura told Sky Italia: "We have worked together for some time.

"Because of his desire, humility and will to achieve things, it's right to grant him the opportunity to realise a dream to play in the Champions League in a team that will fight to win it.

"The transfer of an important player like him can open the door for us to build a stronger side."

Darmian will reportedly sign a four-year deal with United worth ÃÂ£2million per season and will undergo a medical on Friday.

Torino are said to have turned down an initial 12million euro bid from the Red Devils earlier this month.

Italy's first-choice right-back, Darmian has attracted the attention of top European clubs after another solid campaign with Toro, for whom he made 32 Serie A appearances in 2014-15.

Darmian, who joined Torino from Palermo in 2011, has also been a reported target of Bayern Munich and Napoli and has two years left on his contract.

Toro president Urbano Cairo hinted earlier this week that Darmian could depart after four seasons at the club.

"I told Darmian last year after the World Cup that if offers arrived for him I could not sell him then," Cairo told the Italian press.

"We had already sold (Ciro) Immobile and (Alessio) Cerci and I could not afford to lose another excellent player.

"But I promised him we would review his situation this summer.

"Football is like this and it's normal that an extraordinary man like Matteo wants to try and win the Champions League.

Toro began pre-season training on Wednesday and are travelling to the Alpine resort of Bormio this weekend.

Cairo also warned that any club wanting to sign Darmian must complete the deal before Sunday.

"One thing is clear, whoever travels to Bormio will remain with us for the whole season," he said.

"We are now in extra-time (with regards to the transfer market) and on Sunday there will be the final whistle."