Cast your mind back to summer 2018, when football was coming home. That's right, the World Cup. Gareth Southgate's men spectacularly went on to reach the semi-finals of the competition, making it a summer to remember.

Now, fast forward to October 2019, and another international break. A lot has happened since the Three Lions performed their heroics in Russia last year, with Liverpool winning the Champions League and Manchester City winning an unprecedented domestic treble.

Another thing that has happened is the rapid decline of one England's star members: Jesse Lingard. Lingard has been at ​Manchester United since he was seven years old, working his way up through the youth system. The midfielder was shipped out on various occasions to smaller clubs in the hope that he would improve his physicality and decision making. Lingard was selected in the 19-man squad for the Red Devils' 2013 pre-season tour, where he ended up finding the net four times in as many matches - the club's top goalscorer during said tour.

Despite this, he was, once again, sent out on loan - this time to Birmingham City. Two days after joining, the midfielder bagged four goals on his debut to help his new team ease past Sheffield Wednesday in a 4-1 win. Following two more spells away from the club, Lingard would break into the team in the 2015/16 season. He went on to feature 25 times in the league, scoring four goals and providing one assist.

While these stats appear distinctly average, they do not tell the whole story. The then 23-year-old had already begun forging a reputation for himself as a man who can produce on the biggest stage.

Lingard's goal against Chelsea at Stamford Bridge in February 2016 was spectacular, acrobatically firing the Red Devils into the lead in a crunch clash. And Lingard was at it once more in May, as he came off the bench to score the winning goal in the FA Cup final. The United man broke the internet with his goal, with the footballing world taking to social media to slate Alan Pardew for performing an abysmal dance routine as he thought his side would hold on to lift the trophy.

The following season would see the somewhat controversial figure maintain his status as the go-to guy on the big stage, with Lingard scoring in United's Community Shield win over Leicester, before returning to Wembley to score another expertly-taken goal to help his side defeat Southampton in the EFL Cup final.

As a result of his fine form in the 2017/18 season, Lingard was a key member of England's squad in Russia at the World Cup. He started five of the six matches he played, scoring once and assisting once - the goal being a phenomenal curler into the top corner against Panama. His work-rate was integral to the team and he certainly didn't disappoint, winning over fans from around the country (albeit for the summer, anyway). 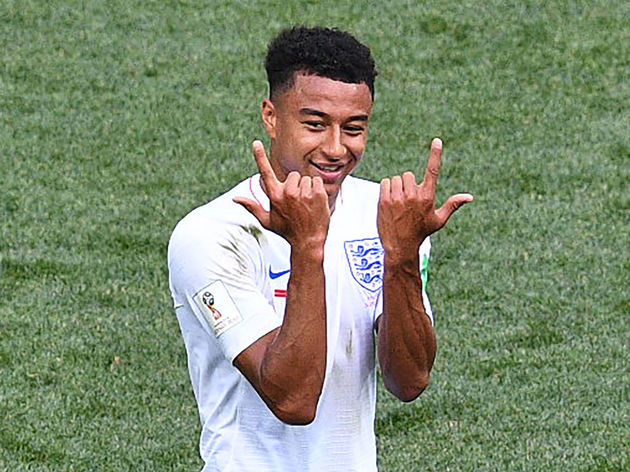 Since returning from that World Cuo, however, the player's performances have been underwhelming at best. A damming stat has also been revealed, indicating Lingard's lack of goal contributions in the league over the last year. While the 26-year-old's performances don't necessarily always produce goals and assists, it has become a major cause for concern that the Englishman's impact on a game has severely diminished.

His clever positioning and tireless pressing make him the player that he is, except, he now looks a shadow of that player. This, combined with the fact that he has no goal or assist in the league since December 2018, makes Lingard's situation look a whole lot bleaker.

In fact, the attacking midfielder was only able to manage an assist as United needed penalties to get past Rochdale.

Did Jesse Lingard score or assist a PL goal?

To make matters even worse, the number 14 has now been dropped from the England set-up, with Southgate claiming that the days of 'privileged access' are over. Instead, the coach has turned towards younger, more creative footballers.

Even if Lingard was selected to represent his country in the upcoming national break, the player would unlikely be able to feature after picking up a hamstring injury in the tame draw with ​AZ Alkmaar in the Europa League. He lasted a matter of moments before he was forced to come off and leave his side playing with ten-men...although with Lingard playing so badly, it probably felt like they were down to ten-men already.

Lingard has long been criticised for his social media activity, with pundits and the public criticising him for his unprofessionalism. His rapping and dancing antics online have left many questioning his age and have often drawn comparisons with other footballers his age, for example Harry Kane. However, the Red Devils midfielder has made a habit of silencing these critics with his important goals.

Is @JesseLingard’s solo effort against Watford your Goal of the Season? See the top 10 and vote now: https://t.co/aJ8yulSbd3 #MUFCPOTY pic.twitter.com/xVKFojaAth

Lingard's last Premier League appearance saw Man Utd take on old rivals Arsenal on Monday, but the ​game ended​ 1-1 - a matching lacking quality. Fans were hoping that, despite his poor form, Lingard would step up and shine against one of his favourite opponents; having scored four goals in his last four starts against the Gunners.

However, it wasn't to be.

There's no denying the desire of Jesse Lingard, but he must now return to the basics if he wishes to reignite his career and have a future at his boyhood club.

With Ole Gunnar Solskjaer at the helm, the player has a coach that respects him, he just needs to find the form he showed when the Norwegian first came in.