Johnstone set for talks over future 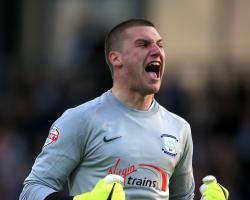 Johnstone enjoyed a successful loan spell at his hometown club last year, helping them get promoted to the Sky Bet Championship via the play-offs.

North End manager Simon Grayson has made it clear he wants to bring Johnstone back to Deepdale, but the 22-year-old has played the first two games of United's pre-season tour and may consider staying to fight for a place in the first-team squad.

Johnstone will discuss his future with Van Gaal in the coming weeks and then make a call on whether to go to Preston, but he says any move would have to be temporary.

"If I go back out I would like it to be a loan," Johnstone said.

"I have to see what happens here first

I have been at this club since I was 10 years old so you have to look at it, speak to the right people and see what the club want from me

Johnstone will probably have to wait until the futures of David de Gea and Victor Valdes are resolved before he hears from Van Gaal about his plans for him.

Grayson is not panicking about the situation.

"We will be patient.

I think Sam is certainly worth waiting for," the Preston boss said recently.

Those comments have gone down well with Johnstone.

"I saw what Simon Grayson said

It was good," Johnstone said.

"I enjoyed my time there

The manager, the lads, the fans and the goalkeeping coach were all great.

There was talk about it

That is between the two clubs to decide."