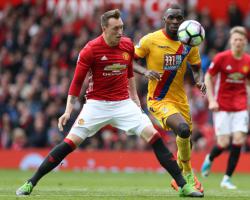 United's application to have the case delayed until after Tuesday's Super Cup was rejected and UEFA has confirmed their appeal against Jones' suspension remains, with a date for the hearing to be set in due course

The England international is set to miss the Real Madrid encounter in Skopje and United's first Champions League group match, but UEFA regulations allow for the ban to be extended to a third game - albeit that scenario currently looks unlikely

The defender expressed that disappointment to the official at the time

United team-mate Daley Blind was fined 5,000 euros for not immediately reporting for a test while the club were fined 10,000 for the rule breaches

There is no suggestion that either player was guilty of doping