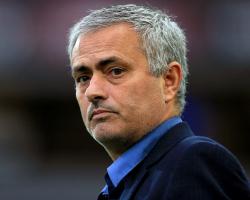 A report in the Independent on Sunday suggested that the former Chelsea boss had written a six-page letter outlining why he would be the right man to replace Louis van Gaal, as and when he leaves Old Trafford.

United declined to respond to the reports on Saturday night, but in a statement on Sunday morning, Jorge Mendes categorically denied them.

He wrote on www.gestifute.com: "It does not occur to anyone that a coach like Jose Mourinho can write letters to clubs offering their services.

"It is absolutely ridiculous and totally absurd."

Mourinho left Chelsea in December after a poor start to the season, despite his team winning the Barclays Premier League in the previous campaign.

According to the report, Mourinho explains in the letter how he would be prepared to adapt his style of management to suit the demands at Old Trafford, and how he would seek to overhaul the squad

The 52-year-old Portuguese's fondness for United is well known and he has been linked with the job before, but United chose David Moyes to succeed Sir Alex Ferguson in 2013 and Van Gaal to come in a year later.

After he departed Chelsea before Christmas, Blues coach Steve Holland predicted Mourinho would want to soon be back involved in the game at the highest level.

''He's a guy who needs and wants football,'' said Holland

''There will be clubs and big clubs who will want him.

''And he's not in my opinion the sort of guy who's going to spend six, seven, eight months sitting at home doing nothing in particular.''

Pressure mounted on Van Gaal after United's 1-0 defeat to Southampton on Saturday, which left the Red Devils five points adrift of fourth-placed Tottenham