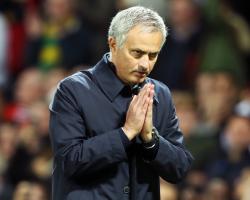 The positives of progress to the Europa League knockout stages and EFL Cup semi-finals have been tempered somewhat by their league frustrations.

Mourinho's men sit an eye-watering 13 points off the lead and nine behind the top four just 14 matches into the season.

A lack of cutting edge has been key, managing just seven goals in their last eight league matches - as many as Alexis Sanchez has scored for Arsenal on his own during that period.

Mourinho has been pleased with his side's displays but is well aware of the missing ingredient, highlighted by Rooney managing a solitary Premier League goal this term.

"With me, he is an attacking player," the United boss said of his skipper, whose only goal came on the opening day at Bournemouth.

"In the national team, they can do with him what they want to do.

"In the national team he is their player, he is not my player, and they can do what they want

It's not my problem.

"In my team, he is an attacking player - he will play as a nine or a 10, or eventually coming from one of the sides.

"So as an attacking player, normally he scores more goals

He scored a couple, I think at Fenerbahce and one in the Premier League.

"Maybe Zlatan (Ibrahimovic) is the one but as the main striker it is normal that he has more goals scored.

"But all the other attacking players, we expect more goals from them."

Anthony Martial has managed just one league goal, while Juan Mata and Marcus Rashford's three-goal hauls make them the next top scorers behind Ibrahimovic.

The veteran Swede netted a seventh goal in six matches in all competitions as United reached the Europa League last 32 with a 2-0 win at Zorya Luhansk on Thursday.

Ibrahimovic wrapped up victory in a way the team have been unable to in the league - showing a clinical edge that will be key on Sunday against a Tottenham side boasting the league's tightest defence.

"Look, if you want to compare this match tonight (against Zorya) with Everton match, we can," he said, throwing back to last Sunday's 1-1 draw at Goodison Park.

"One-nil up, complete control, (Ander) Herrera hit the post, no 2-0

They go there in the last minute, goal.

"Sometimes little details make a difference and the goal is a big detail.

"We are not scoring enough goals for the football we play.

I don't think he made any phenomenal saves.

"When we play against other teams in the Premier League, normally they are the man of the match

"Goals make a huge difference so we need to score more goals."

While underperforming in attack, United have done slightly better defensively given the number of injuries they have had to deal with.

Eric Bailly's return to action after six weeks out with a knee injury is a timely boost ahead of the festive period, but Luke Shaw and Chris Smalling remain absent.

Neither will be fit to face Tottenham on Sunday, with Mourinho now hoping centre-back Smalling can return from his foot issue before Bailly heads off to the African Nations Cup with the Ivory Coast in January.

"(Bailly) is a big loss but we know that, so let's hope that Smalling can recover in time to replace him in the squad," he said.

"With so many matches, we need players

In this moment, I think we have (Phil) Jones, Bailly and Marcos (Rojo)

"Okay, we play Tottenham, we play Crystal Palace, West Bromwich, Reading, semi-finals, West Ham away - in that period we have lots of matches and it's important to have more options.

"I think (Smalling will be back by the) end of the year, by Christmas."