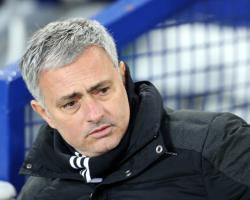 A sixth draw since the start of October leaves United 13 points off Premier League pace-setters Chelsea but Mourinho, in a brief and testy post-match press conference, adopted an incredulous tone over the result

"Another game with a very good performance in a very difficult place to play," was his verdict

"We are playing very well at home, super-dominant

We are playing very well away with some amazing performances from (Phil) Jones and (Marcos) Rojo, and not getting the results we deserve

When you play bad you can try to play well

When you play well there is nothing more you can do

"This is what we are doing for a long, long, long time, playing well, better than our opponents

Mourinho claimed not to have seen either the penalty incident or a dangerous two-footed lunge from Rojo on Idrissa Gueye that might easily have earned a red card.

He did, though, offer a somewhat sniffy critique of the Toffees and seemed to suggest sides under his stewardship are given a rough ride by the media.

Asked why Fellaini had been summoned from the bench, the Portuguese said: "Everton is not a passing team any more like they were in the past

"When you have on the bench a player with two metres (in height) you play the player in front of the defensive line to help the team to win the match."

He later added: "When my teams are playing pragmatic football and winning matches and winning titles you say that is not nice and right," he said

"Then my team play very well - and is a huge change to the last two or three years (at United) - now you say what matters is to get the result no matter what.

"In this moment we have teams getting results that defend with 11, kick ball and attack the space on the counter-attack...it is phenomenal, it's beautiful."

Everton boss Ronald Koeman has overseen just one win in nine now but the manner of the comeback gave him cause for optimism.

"We can fight back, we showed that today," he said.

"We did not deserve to lose the game and we showed that fighting spirit in the second half.

"We showed commitment and quality."