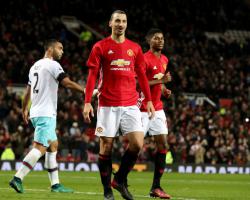 Zlatan Ibrahimovic and Anthony Martial both struck twice as United eased to a 4-1 victory at Old Trafford on Wednesday.

Manager Mourinho stayed out of sight after accepting a one-match touchline ban earlier in the day for his sending-off during Sunday's Premier League draw against the same opponents.

The Portuguese was inside the stadium but was only seen before and after the game when, after previously bemoaning his side's luck, he expressed his satisfaction with the outcome.

"I'm pleased with the goals because the performance is something we're used to," Mourinho told Sky Sports

Asked where he watched the game, Mourinho said: "It's a secret."

United conceded after just 90 seconds on Sunday but this time roles were reversed as Ibrahimovic fired them ahead in the second minute.

The hosts should have added more but squandered numerous chances before United academy product Ashley Fletcher stunned them with a shock equaliser against the run of play after 35 minutes.

Ibrahimovic added gloss to the scoreline in stoppage time.

United will now play Hull for a place in the Wembley final.

Among the other positives for United were the excellence of Henrikh Mkhitaryan, continuing his recent rejuvenation, and the return from exile of Bastian Schweinsteiger with a late cameo off the bench.

He will now have to wait at least another week for a chance to reach the landmark after a booking landed him with a suspension for Sunday's clash at his former club Everton.

West Ham boss Slaven Bilic admitted his side were outplayed.

He said: "I'm very disappointed, they deserved it

You can't expect anything here when you have such a slow start to the game."