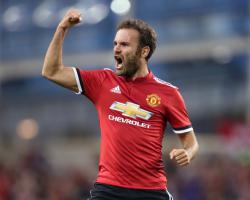 The Manchester United midfielder is the first member of Common Goal, an initiative created by streetfootballworld, which supports more than 120 football charities around the world

Mata said: "What we're trying to do is define a shared social agenda for football

"By making the pledge, we can form a lasting connection between football as a business and football as a tool for social change."

Mata recently visited one of the charities in Mumbai, India, and the 29-year-old Spaniard added: "One of the first lessons I learned in football is that it takes a team to win a game

"I urge my fellow players to get involved."

The first target is to assemble a 'starting XI' of committed players, with the long-term goal of unlocking one per cent of the entire revenue from the football industry for grassroots football charities