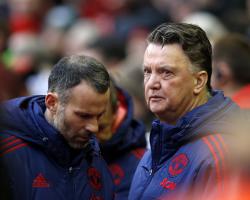 Reports have suggested the Dutchman spoke to United executive vice-chairman Ed Woodward about his future immediately after Saturday's 1-0 home defeat to Southampton, with some claiming Van Gaal offered his resignation.

As was always scheduled, the manager and his players had both Sunday and Monday off, and it is reported Van Gaal, returning to work on Tuesday to take training, is set for further discussions with Woodward this week.

United's next game is an FA Cup fourth-round trip to Derby on Friday.

Boos rang around Old Trafford following the final whistle of the Barclays Premier League contest on Saturday as Van Gaal endured what he later described as the worst reaction he has heard from supporters yet during his time in charge.

He said United fans were "right to boo" and that he was disappointed he could not fulfil their expectations.

The Red Devils - frequently derided of late for playing in a dull, uninspiring way - had just one shot on target in the match.

They are now five points off the top four in fifth place, 10 points behind leaders Leicester and have won only three of their last 13 matches in all competitions.