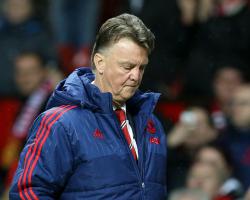 A poisonous atmosphere took hold at Old Trafford on Saturday after Van Gaal's side slumped to a 1-0 defeat against Southampton.

As soon as Charlie Austin nodded in his 87th-minute winner, some United fans started hurling abuse at Van Gaal in the home dugout.

Despite the best efforts of the Old Trafford PA system, boos reverberated around the stadium following the final whistle and the Dutchman was targeted by fans in the Stretford End and South Stand as he headed down the tunnel.

It was not an enjoyable experience for the United manager or executive vice-chairman Ed Woodward, who fixed his eyes on Van Gaal from the directors' box after the final whistle.

Woodward has invested a lot in the 64-year-old and has been fiercely determined to see him succeed.

Van Gaal refused to say whether he would resign in a post-match briefing.

"This question, I shall never answer to you," the United manager snapped.

The main question facing Woodward is: how long can this continue? Van Gaal's claim that United were back in the title race following their 1-0 win over Liverpool last week now seems fanciful.

They are now five points behind fourth-placed Tottenham in the Barclays Premier League standings with 15 matches left.

But it is not so much the results that are the issue for United fans - it is the team's performances.

Van Gaal accepts he is failing to deliver attractive football and convince the fans he is turning things around.

"I'm very disappointed that I cannot reach the expectations of the fans," the United manager said.

"They have - or they had - great expectations of me, and I cannot fulfil them, so I am very frustrated because of that."

There was no objection from Van Gaal to the jeering that came his way as he trudged down the touchline with clipboard in hand.

"They have also knowledge of football, of entertaining football, and you have to play football to entertain the fans.

"(On Saturday), I don't think we have entertained the fans, so they can be very angry."

David Gill, whom Woodward replaced after Sir Alex Ferguson's retirement, admitted the team were "under-achieving" this season and that the style of play under Van Gaal was not easy on the eye.

"I am not going to sit here and say it is that attractive," the United director told Radio Five's Sportsweek programme.

Pundits sometimes try their best to gloss over the negatives, but Bojan Djordjic could not contain himself following the final whistle on Saturday.

"For so many weeks, the fans are clapping him off and it just grows, the frustration, and this was the final straw," the former United midfielder said.

"The only corner we are turning is into some dark alley where we get robbed again."

Van Gaal suggested bad luck, particularly with injuries, and the opposition's tendency to defend in numbers at Old Trafford, were the main reasons behind the current slump in form

"There are different aspects

We are not very lucky with our injuries, that's a problem," said Van Gaal, who watched Matteo Darmian hobble off in the second half holding his chest after an aerial collision with Shane Long.

"Now we are missing five full-backs.

"But nevertheless, we had to win, and we could have won, but it is not happening.

"You have seen two teams who were very busy with tactics, but they don't create many chances, and that's why it was a poor match."

Van Gaal, who has spent over ÃÂ£250million since joining United, bridled at the suggestion he has been wasteful in the transfer market.

"We have also sold a lot of players

I never read that," he said with a huff.

"You know when Manchester United is coming, we have to pay much more than another club, so that's also an analysis, and it is not rubbish what I am saying."

The Dutchman concedes Saturday's result means United have a tough task on their hands qualifying for the Champions League.