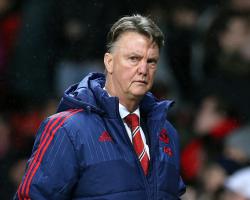 "It's always difficult to play against such an opponent with 10 or 11 players behind the ball," Van Gaal told BT Sport 2

In the second half it was a little bit better but not too much because they were very well organised.

"It's more easy to defend than attack and at the end we get the penalty but it was a deserved penalty.

"We win this match and that's the most important thing

I said in advance to the boys, 'The only thing that counts is we are in the second (fourth) round', and we did it.

"How many chances have Sheffield United created? Nobody is talking about that

Everybody is talking about the fantastic defence of Sheffield United

I don't think you can do different as a player of the second (third) level."

Meanwhile, Van Gaal suggested he would not add to his squad during the transfer window.

"I don't think it's very wise to purchase players in January," he added.

"When it is possible and we think he can give us a contribution of our level then of course we shall do it.

"But normally we don't do that